Green light given to brick PRS scheme in Hornchurch

PCKO, an AHR company, has received planning approval for a private rental scheme on the site of the former Nalgo Club in Hornchurch, London.

Mercury Land Holdings, a company wholly owned by LB Havering, has commissioned the development which will comprise of 44 PRS units within a single five-storey block.

The site is located in the historic heart of Hornchurch; an area predominantly characterised by residential properties to the north, west and east. The scheme has been sensitively designed with this in mind and through careful use of materials will connect with the surrounding residential character as well as the Queen’s Theatre and other prominent public historic buildings in the area.

“Our aim for this scheme has been to enhance the appearance and functionality of the area, whilst creating a development that is integrated with the local neighbourhood. These new apartments will deliver a range of high quality new homes to the London Borough of Havering.”

PCKO has designed the scheme with a stepped elevational aspect to ensure that it blends with the scale of the surrounding context. The block will be five storeys to the east to create a strong frontage for North Street; this will be reduced to three storeys on the western side. This proposed massing has been carefully considered and reflects the hierarchy of the existing urban grain and surrounding neighbourhood.

Berkshire Orange Stock brick has been proposed as the primary material, connecting the scheme with the wider local vernacular. The elevations are broken by different surface treatments, with horizontal relief pattern forming panels and creating a legible framed composition. The corners of the building are articulated with balconies forming a dynamic rhythm and adding interest to the street scene. Surface treatments for recessed areas and varying the parapet wall height also creates a contemporary ‘second skin’ language for the building, making the whole block more lively in character.

With landscaping at the heart of the project, the scheme has been configured as an L-shaped block positioned in the middle of the site, providing comfortable distances from the building edge to the boundary from each side. A landscaped zone facing North Street provides a buffer for the development and will establish public and private areas, it will also enhance and continue the existing tree lined boulevard adjacent to the Queen’s Theatre. Green roofs have also been incorporated into the design and will be situated on third and fifth storey flat roofs.

Work is anticipated to start on site late 2017. 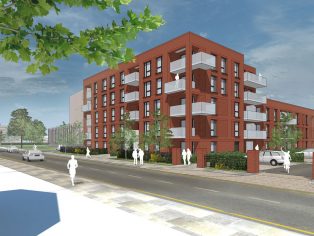