Back in 1964 The Beatles were topping the charts, Tokyo was playing host to the Olympics, the nation was glued to The Fugitive and it was also in this year that Grundfos Pumps opened their first office in the UK.

In this our 50th anniversary year, we look at the major changes that have taken place within the pump industry and it is not surprising things have changed dramatically – as you would expect from a piece of equipment that is a precision highly engineered solution.

However, one of the biggest changes the market has witnessed is the change in the power consumption drawn to run pumps. For example back in the early 60s it would not have been unusual for a domestic circulator to consume well over 100 watts as opposed to todays’ equivalent pump that operates as just 5 watt.

Today there is potential for all pumps to contribute to huge energy savings, as pumps account for 10% of the world’s total electrical consumption. We are however, equally aware that 90% of all pumps installed today work inefficiently and consume too much energy. An example of this is if you take the total sales of Grundfos A-labelled pumps from 2005-2012, this has saved 1.8 billion kWh globally which corresponds to the annual electricity consumption of 1.1 million EU inhabitants.

You probably wouldn’t have expected pumps to become a standard bearer for saving energy 50 years ago, but we have, and our journey continues. Find out more by visiting www.grundfos.co.uk. 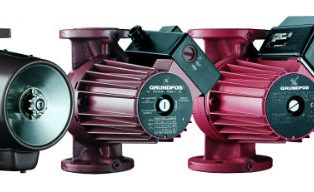