Well designed and expertly installed structural glass within a heritage building can provide some truly beautiful results. Glass will enhance rather than obscure the original architecture of the building, giving a result that is structurally sound and meets all the demands of modern building requirements.

Glass specialists Ion Glass have a well deserved reputation for working in heritage buildings and have developed some unique skills and techniques to ensure their wholly bespoke glass works perfectly in any situation.

The scope of their work is impressive. Successful installations include structural glass linking centuries old buildings to modern extensions; bespoke framed and frameless balustrades on balconies, staircases or enclosing mezzanine floors; glass screens to enclose meeting rooms or to retain heat and sound without restricting light flow and impressive glass doors for entrances that are both inviting and secure.

Recently Ion Glass were responsible for the magnificent curved glass balustrade flanking the Rotunda Staircase at the heart of newly refurbished Tate Britain.

Situated on Millbank, construction of Tate Britain was originally carried out in 1893 by Higgs and Hill, with the gallery opened to the public in July 1897. It was named the national Gallery of British Art, but is more commonly known as the Tate gallery after the founder Sir Henry Tate.

In 2010 the first phase of construction began to transform the oldest part of the building, the entrance, Rotunda and galleries in the south east quadrant, to create new spaces for education, displays and social activities. Works included the refurbishment of The Whistler Restaurant, the creation of the Djanogly Café and the transformation of the Members Room. The circular balcony of the rotunda’s domed atrium, which had been closed to visitors since the 1920’s was part of the £45million refurbishment, with the whole redevelopment opened to much acclaim last November.

Ion Glass provided Tate Britain with an intricate curved glass balustrade to the new spiral staircase that forms the centre piece of the development. At the heart of the Rotunda, the balustrade features decorative opaque glass infill panels made from laminated back painted glass with a sandblasted effect. The project was especially complex, with an inner and outer skin of decorative opaque glass on either side of the spiral staircase.

Each pair of panels had to fit accurately around the curve of the spiral and also to sit perfectly around each individual step. The glass is suspended between polished stainless steel uprights with a 5mm clearance between the stonework of the steps and the handrail above.

“The job was definitely a challenge. Not only was it exceptionally high profile, but timings were critical with a grand opening on 18th November. The glass is always the last element to be fitted as the measurements can’t be taken until the other building works are complete, giving us a limited time frame to carry out the work.

“We carried out detailed laser surveys to provide precise measurements which accounted for nuances in the metalwork as well as the differing radii of the inner and outer panels of each section.

“The whole process was double-checked, taking laser measurements from all angles to ensure the radius of each curved section of glass was accurately recorded and the results transferred direct to the drawings.

“Each infill at the Tate was curved, making traditional MDF templating impossible but this was such a complex installation we created templates in 5mm glass to ensure the accuracy of the final result. Any discrepancies when the glass templates were fitted on site were immediately recorded on the drawings.

“The laser measurement system ensures accurate manufacture of the finished glass product and is also significantly quicker than traditional templating – on a less complex job it would be possible to proceed direct to manufacture, helping to avoid delays to the finished project.’

“It was certainly a tense time when the sandblasted panels were delivered on site, only days before the opening date. Fortunately every single panel fitted perfectly. We were delighted with the finished result – the staircase is a real testament to the timeless beauty of glass in a national heritage building.”

The achievement was described by the architect as ‘remarkable’ whilst Penelope Curtis, director of Tate Britain said the renovations ‘reassert and enhance the original grandeur and logic of the galleries.’ Without doubt the Rotunda Staircase has become in itself a work of art in one the nation’s most renowned art galleries. 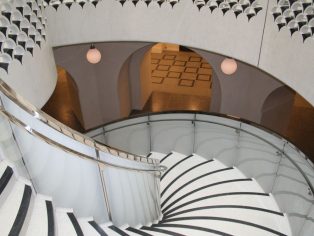