He said that if each of England’s rural local authorities built one new 5,000-home garden village during the next decade it would deliver a million extra desperately needed new homes. He therefore proposed giving local authorities powers under the New Towns Act to create new garden villages of between 1,500 homes (a small village sizable enough for a new primary school, pub and a village food store) to 5,000 homes (a large village/small market town supporting a secondary school and a high street).

“Localising the New Towns Act could revolutionise planning and housing delivery. It answers the concerns of most residents – no more development forced into their back yards. It answers the concerns of taxpayers – by capturing land value uplift development pays for services and great design a new community needs to thrive. By making land readily available for new homes, SME builders, Housing Associations and new entrants can step up delivery in a way the large house-builder model doesn’t allow (as they rely on paying back high land values by selling homes slowly to maintain values).”

Lord Taylor was the keynote speaker at the Building Sustainable Communities event in Peterborough which looked at how the country can address its housing shortage and build sustainable new communities.

Other speakers at the workshop included:

“Larkfleet Group is a major house builder across the region and has recently expanded its operations into Norfolk and Suffolk and the south-west of England.

“Wherever we are building, we are determined to build communities, not just houses. That’s why we are hosting this workshop and exploring the roles of various organisations in creating communities.” 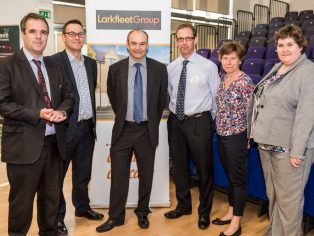