Alongside project partners including Morgan Sindall, CWA Engineers and Pick Everard, the Melton Cattle Market was previously recognised at the regional RICS Awards as well as gaining praise from Princess Anne during its opening in early 2018.

EKV Design’s work has been shortlisted by the LABC in the Best Public Service Building and Best Small Commercial Project categories with winners due to be announced on Friday 6 July in Leicester. Those taking the top title in the regional awards will then go on to a national final in November.

“Being recognised for our role in such a regionally significant project is huge cause for celebration. Plans to develop the facility were circulating for over a decade so it means a great deal for the final project to have been received so warmly both by our industry peers and the local community.”

The £5.5million facility is the largest town centre livestock market in the country, supporting 2,500 farming customers and 350,000 visitors. The investment was not only part of securing the market’s economic future but the reputation of Melton and Leicestershire as a rural capital of food.

“The regeneration of Melton Cattle Market has secured its future for the next 20 years which will not only to boost the local economy but preserve a landmark that’s over 1,000 years old.”

“Our award-winning design had to be DEFRA compliant and sensitive to the historical importance of the site but we also wanted visitors to have an enjoyable experience. While similar markets across the country are closing, we wanted to demonstrate that great design makes a real commercial difference.”

The project was procured through the East Midlands Property Alliance (empa) framework, which is managed by Scape Group, a public-sector procurement specialist.

Find out more about EKV Design at www.ekvdesign.co.uk or join the conversation @EKVDesign on Twitter and @ekv_design on Instagram. 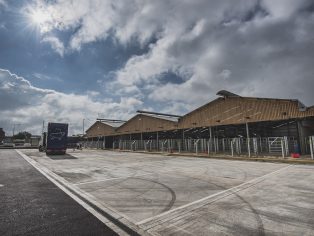