The former Derby Grammar School – which was on English Heritage’s ‘Buildings at Risk’ register – has been lovingly restored with private funding during the worst doldrums of the recession.

Lichfield-based architects Brownhill Hayward Brown has recently completed work on St Helen’s House, a Grade I listed building, in a £1.3m project after being appointed by developer Richard Blunt in 2008.

At the time, Richard had hoped to raise the funds for the extensive restoration from a new build residential scheme on the northern part of the site – but these plans were dashed when the recession hit. Undeterred, he made a courageous decision to privately fund the project.

“It was a very brave decision by Richard to source funding for this project himself. There was limited local grant assistance, so there was a danger that this project would not get off the floor once the plan for residential housing fell through.

“We are now beginning to see the demand return for such properties, which would make projects like this much easier to fund in the future. There is certainly a feeling that we are turning the corner following the recession.”

Despite the change in the funding method, no expense was spared on the project as Brownhill Hayward Brown’s four-strong team of architects set about repairing things such as the parlous stonework, which was rectified after discussions with a stonemason found the closest available match was the Peakmoor stone found locally in Derbyshire.

“We were very honoured to be able to work on the ﬁnest surviving Georgian town house in Derby and ensuring that we respected the heritage of the building was paramount. We’ve managed to retain many of the building’s original features and the skyline and silhouette of the building have been preserved. We are extremely proud of the work that we have completed.”

As well as the quality of the finish, it was the consideration of the building’s history that impressed judges enough to secure Brownhill Hayward Brown a troika of both local and industry awards for the project.

Judges from the Derby Civic Society said the work had been “undertaken with the utmost care and attention to detail” as they awarded St Helen’s House Best Restoration Project, whilst it was also given the George Rennie award – an annual city heritage accolade.

For work transforming the site in to an office space, the firm was also awarded “best re-use of a Georgian building” at the Georgian Group Architectural Awards. 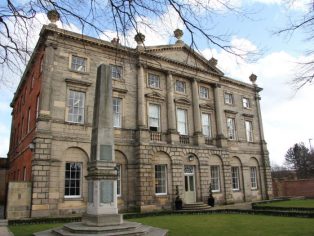