A host of key stakeholders celebrated a major milestone in the development of Bristol’s flagship new eco-friendly business park, which will be a showcase development for the city as European Green Capital in 2015.

The Assistant Mayor, Cllr Mark Bradshaw, and all those who had been involved in getting the project off the ground visited Filwood Green Business Park this week to mark the official topping out of the much-anticipated development, which is due to be completed by February 2015.

The green business park will provide 40,000 sq ft of workshop and office space accommodation for businesses and is expected to support 350 jobs, as well as further cementing Bristol’s already strong reputation for sustainability after earning the first ever BREEAM ‘Outstanding’ rating for an industrial building in the South West.

The ceremony follows a recent official handover between Copenhagen and Bristol, the seventh city to receive the European Green Capital award since the initiative was launched in 2008. The honour rewards cities which are seen to be making efforts to improve the urban environment and create healthier and more sustainable living areas.

Project managers from Bristol-based contractors Midas Construction welcomed delegates to the £11.6million Filwood site for a tour to see progress on the build before the official topping out ceremony, a traditional event in building that marks the last tile or beam placed on top of a building. In this case the highest point includes a sedum green roof and extensive photovoltaic panels.

“Filwood Green Business Park is a crucial £11.67 million investment from the Council, the Local Enterprise Partnership and the European Union. Thank you to everyone who has contributed to making this project happen including the HCA and Midas Group. This is an important milestone for South Bristol in moving closer to delivering a modern, state of the art and highly sustainable resource for the community and will complement other local facilities. This is great progress as we approach Bristol’s year as European Green Capital with this BREEAM Outstanding building opening in early 2015.”

“Filwood Green Business Park will support local businesses, particularly start-up enterprises and also those looking to invest in South Bristol. I want this to be a hub for enterprise, innovation and job creation in South Bristol, where a third of Bristolians live and where there are still major challenges around health, jobs, skills and access. The building will offer 40,000 sq. ft. of space in a mix of workshops, offices, incubation space and hot desks.”

“I encourage businesses that are interested in taking space at the Filwood Green Business Park to get in touch with the team or visit the website to find out more information.”

“Stride Treglown has developed the design of Filwood Green Business Park in partnership with Bristol City Council, the local community and the Homes and Communities Agency to provide much needed flexible, interactive and sustainable workspaces for South Bristol.”

“As a BREEAM Outstanding building, it demonstrates its green credentials with the use of photovoltaics, A+ Rated materials and planted roofs externally, however, its sustainable ethos runs deep.”

“Designed to achieve a 40 per cent CO2 reduction, saving the equivalent of 276 double decker buses of carbon annually, this is a building that invests in Bristol’s future.”

“Our designers are proud to see the building topped out and look forward to tenants and visitors breathing life into the new building in 2015, the year Bristol hosts Europe’s Green Capital.”

“Our commitment to Bristol City Council was to not only to build the South West’s greenest business park, but to be a sustainable and green contractor throughout the development itself.”

“This has included sourcing as much of the local labour and contractors as we could. Companies such as M H Massey, and Dancourt Group are some of our biggest supply-chain partner contractors and they are based only a stone’s throw from the site, so many of their guys are able to walk to work.”

“We have also delivered a lot of training and development programmes and seen three local boys complete an apprenticeship scheme with us during the build.”

This development forms part of wider plans to regenerate Filwood Park, which is being led by the Homes and Communities Agency (HCA) and also includes a provision for new public park and up to 150 new and affordable homes. The HCA has supported the business park by making the land available to the council, securing outline planning permission to develop the wider Filwood Park site and providing key infrastructure including a new access road and services.

“This is a vitally important project for south Bristol which will raise the bar for the standard of development that will follow it at Filwood Park.”

“It also demonstrates in a vivid way what can be achieved when resources and public land are combined and partners work together to turn a shared vision into reality. The jobs and new development at this business park have made a big difference to the city.”

Midas Construction, part of The Midas Group, began work in February 2014 on the business park in Knowle West. The development is part of Bristol City Council’s wider plans to regenerate South Bristol, providing opportunities for enterprise and employment in the growing green sector. The business park has a strong environmental ethos, and was recognised as one of the highest scoring buildings as a finalist in the 2014 BREEAM People’s Choice Award. 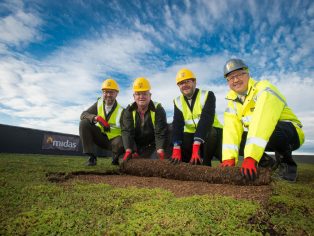