Fentress Architects has announced the winners of the 2017 Fentress Global Challenge, an international design competition challenging young and student architects to envision an Airport of the Future for the year 2075. Judged by an esteemed panel of aviation and design  professionals (see below), the winning designs  “were very impressive in terms of both the quality of design as well as the use of technology, which  was very innovative and creative,” per Curt Fentress, Principal of Design at Fentress Architects.

This is the sixth year that Fentress Architects has sponsored and administered the award, which brings a First Prize of $15,000 and a summer internship at Fentress’ Denver office; four additional winners will receive smaller cash awards.

And the winners are……

1st Place
Name: Thomas Smith
Citizenship: United Kingdom
College: University College London
This proposal for the O’Hare International Airport floats on lake Michigan next to the Iconic Navy Pier downtown Chicago.  The design uses pods that passengers can enter and exit at the start of their journey.  These pods are loaded into aircraft that use vertical takeoff and landing.  The well-thought-out proposal outlines a sustainable and functional design. Judges particularly liked the challenge to the current airport along with thinking about a new type of plane, and were impressed with Smith’s clear drawings and good research.

2nd Place and People’s Choice Winner
Name: John Cyril Isaac
Citizenship: Philippines
College: University of Santo Tomas
“The living airport” also known as the “intelligent airport” is equipped with a computer mainframe (brain) ran by an artificial intelligence program. It has the capability to progress itself by developing more adaptive and technically advanced systems. Its sensors in the control tower and different locations in the whole airport synthesizes, analyses, and elicits precise responses and solutions to the most common irregularities or complex concerns. 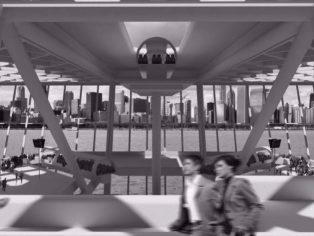