The winners of SFE Facades Awards 2015, the second competition of the Society of Facade Engineering, have been announced.

The awards were presented during the recent ‘Glass Supper’, the prestigious International gathering of facades-focused architects and engineers with RIBA President Jane Duncan presenting prizes for three categories.

Announcing the winners, Chris Macey FSFE, Chairman of Wintech Group and Chairman of the Judges, commented:

“The judges believe that the winners have significantly raised the bar in terms of imagination, execution and vision with some exciting projects that are World Class by any standards.”

Commenting on each of the projects, Macey started with the overall winner.

“The Ryerson Centre employed a number of unique and new technologies in the completion of a complex geometry building envelope and its application to complex structures.

“Essentially, laser scans of the structure were taken and these were combined with a BIM model that finally allowed the automation of all of the other design information needed for manufacture.

“The photographs of the building envelope are a clear demonstration of how technology in the future might simplify the whole delivery process of major buildings eradicating the risk of out of tolerance structure.

“The other overriding benefit is that the normal consideration of building tolerances in the design of building envelopes can now change, whereby the facade design can be adjusted automatically to accommodate as built structure just a few days before the components are required on site.”

The Chairman also spoke about the Guys Hospital Tower, the original hospital tower building which had been “transformed from a derided old building into an architectural triumph on the City of London skyline”.

The building used a number of cladding techniques but all of these were constrained to some extent by the need to maintain certain aspects of the original facade design whilst accommodating inherent inefficiencies of these forms of construction.

“Not only has a vast improvement been made to the building’s architecture and the environment of its occupants, but also the work was completed whilst the hospital was completed operational.

“The project was widely regarded by the judges as being a superb example of what can be achieved with existing buildings. This is exemplary of a world class refurbishment project.”

Macey noted that due to the fact that two separate entries had been submitted for the Bombay Sapphire Distillery, judges had decided to make a joint award.

“The project is a unique example of how engineering ingenuity when combined with excellence in manufacture and delivery can be combined to create something that is totally unique.

“It is also testimony to the determination of the construction team and the client’s dedication in delivering a spectacular architectural masterpiece.

“Hopefully the distillery building will become a point of reference demonstrating what is achievable with the right team and modern technologies for future buildings.”

Summarising the importance of the competition Chris Macey said:

“With the facade being one of the most expensive parts of a building construction and the primary environmental modifier it is only right that the scientific and engineering expertise needed to deliver this fundamentally important element of the construction of modern buildings is properly appreciated.

“The SFE competition provides the only real opportunity for those behind great examples of facades excellence to gain proper recognition by their peers and in the wider architectural community.”

For the headline sponsors of the competition Reynaers Aluminium, the company’s managing director Martine Reynaers commented:

“I have been very impressed to see that these awards have generated such diverse entries relating to projects all around the world. The standard of the winning entries has been exceptional, showcasing some architecturally very exciting projects. I am delighted that Reynaers has been involved as main sponsor.” 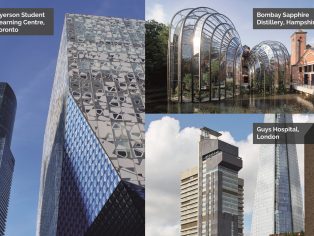