One of the highest housing estates in the UK has survived 100mph+ winds without any damage to the roofing after employing SpecMaster, the free-of-charge roof specification service offered by Redland – the UK’s leading manufacturer and supplier of pitched roof systems.

The largest public sector housing venture in Wales when built in the late 1960s, the hill-top Penrhys estate is now maintained and operated by Trivallis, one of Wales’ largest registered social landlords. Built at 1,100ft above sea level, Penrhys was always going to suffer from very high winds, but the issue was worsened by monopitch roofs, a design feature rumoured to have been inspired by a Portuguese holiday complex.

Lee Tapper from Trivallis, Surveyor and Clerk of Works on the project, explains,

“The monopitch roof can double the wind speed and the way the properties are positioned there are vortices between the blocks of flats, which makes the wind even faster.”

The estate has always suffered from leaks caused by tiles lifting and now the roofs were coming to the end of their design life, Trivallis brought in the SpecMaster service.

“The service ensures that we meet the current British Standard, we get the technical advice that we need and we get the guarantee from Redland which means we know we don’t have a problem with the roof for 15 years. We know that our properties our watertight and that our roofers know exactly what they’re doing”

Altogether 15 two-storey blocks of flats, a total of 86 apartments, were re-roofed with Mini Stonewold Tudor Brown and Slate Grey interlocking concrete slates with a very tight fixing specification that stipulated that the first seven courses were both nailed and fixed. During the work the Redland Specification Manager visited the site to provide the roofing contractor, Jefferies Contractors, with technical support, any training required and to monitor the quality of the work.

“We found this service very helpful because it reassures the client that we’re carrying out the work to the right specification and it reassures us too, because we know we’re following the correct specification and so it’s all under warranty. And it works too. Storm Doris just passed through with winds of more than 100mph and there’s been no damage”.

Developed for architects and professional specifiers, the SpecMaster specification covers every detail of the complete roof – including slates, tiles, fittings, accessories, fixings, ventilation, underlay and battens – and covers every aspect from the tiling, performance specification and British Standards compliance to best practice for flashings and carpentry.

To simplify ordering, the specification comes with all the relevant Redland product codes and a material list to assist quantity surveyors and contractors. It is also compiled in an NBS-based format so it can be readily incorporated, along with other relevant NBS sections, into a formalised project specification. 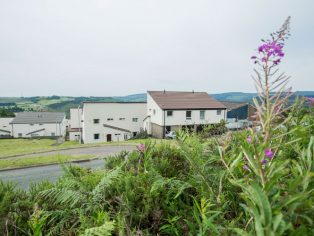