Experts on planning, development and building gathered in Peterborough to discuss solutions to the nation’s ‘housing crisis’ – the shortage of homes caused by the fact that the UK is not building enough new properties to meet the needs of a growing population.

The event was the second in an annual series of conferences organised by The Larkfleet Group of Companies, the building and development group based in Bourne near Peterborough.

Lord Taylor spoke of the possibility that new garden villages could become a ‘third leg’ of development alongside redevelopment of former industrial land and additions to existing urban settlements. He stressed the potential benefits of garden villages for permitting the funding of infrastructure such as schools and community facilities as part of building new sustainable communities. He welcomed the fact that the government had embraced this concept and that garden villages are now part of national housing policy following an announcement in the budget in March of this year.

He told the conference:

“Garden villages create long term investment opportunities aligned to development of social infrastructure. By aligning the economic interests of builders, government and residents, they can make a substantial contribution to solving the housing crisis.”

Simon Machen talked about several innovative new initiatives that Peterborough City Council is undertaking to encourage the building of new homes which is, he said, the only long-term solution to meeting the housing needs of the city.

He told the conference:

“Local authorities need to move beyond their traditional roles as regulators of the planning and development system to become facilitators – and even developers – in order to meet the needs of their communities.”

Tim Watton talked of the impacts of new planning legislation and the tension between neighbourhood plans drawn up by local communities – which now have a statutory role in the planning system – and the need for local councils to meet targets for house building.

Karl Hick, CEO of The Larkfleet Group of Companies who opened the conference, said:

“It was a very interesting event with some lively questions from an expert audience.”

More than 70 people attended including councillors and officers from several local authorities, architects, planners, builders, surveyors and others involved in the housing industry. 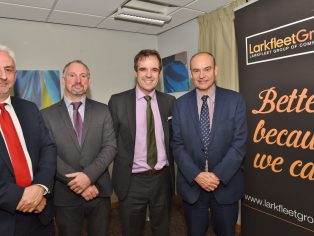 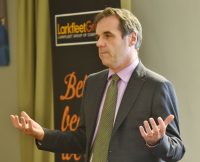 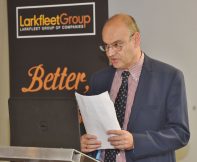 Karl Hick, CEO of The Larkfleet Group of Companies, opened the conference.