Entries are invited for the 2017 European Copper in Architecture Awards 18 – a celebration of contemporary architecture with copper and its alloys and an opportunity for architects to showcase their designs. The final deadline for receipt of entries is 30th April 2017 and full details are available at copperconcept.org

These biennial awards continue to grow in stature, with over 50 entries representing 17 countries in 2015. They gather together exemplary and innovative uses of copper in the finest contemporary European architecture and bring them to an international audience through a promotional programme.

Eligible entries must incorporate cladding, roofing or other prominent architectural elements of copper or copper alloys. Any scale or type of project can be entered, from major landmark buildings to modest installations. A panel of architects – including some of the most influential designers in Europe – will judge all the entries on their architectural qualities, based on images submitted with entries. Judges are generally selected from previous award winners, bringing an entrant’s viewpoint to their role.

The Awards 18 Entry Form and details can be downloaded from copperconcept.org where videos, information and images from previous Awards can also be viewed. 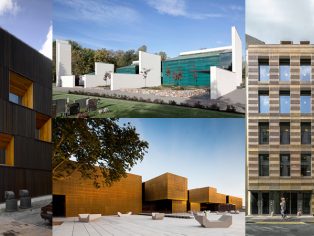 Past winners of the European Copper in Architecture awards. Please see individual photos for captions/credits.