An international team of architect judges has shortlisted ten projects for the 2015 European Copper in Architecture Awards, a celebration of the very best in contemporary architecture. By Chris Hodson.

The seventeenth iteration of these popular, biennial architectural awards recognises the growing influence of copper and its alloys on modern design. But it also exposes to a wider international audience inspirational projects, some of which might otherwise go unrecognised. This year, over 50 entries were received from 17 countries: Austria, Belgium, Denmark, Finland, France, Germany, Hungary, Iceland, Ireland, Italy, Poland, Portugal, Russia, Spain, Sweden, Switzerland and the United Kingdom.

Entries demonstrated a real diversity of projects, ranging from major landmark buildings to modest installations. All the projects incorporate cladding, roofing, or other architectural elements of copper or copper alloys but, as always, judging was essentially based around the overall architectural qualities of
the projects. They were assessed from photographs, drawings and descriptions submitted by their architects.

This year’s judging panel consisted of four architects: Ulla Hell (PLASMA studio, Italy); Erik Nobel (NOBEL arkitekter, Denmark); Fernando Sá (Pitágoras Aquitectos, Portugal) and Keith Williams (keith williams architects, UK). All have been recipients of previous Copper in Architecture Awards and therefore understand the aims of the programme from the competitors’ viewpoint as well as that of the judges and the sponsors.

Chair of the Judges, Keith Williams commented: “Whilst there was a considerable degree of unanimity amongst the judges, there was also considerable debate. Neither the scale of project nor the quantity of copper used was regarded a factor, as is evidenced from the range of projects shortlisted. The judges were far more interested in the contribution that copper and its alloys can make to the creation of fine architecture.”

The judges initially faced a daunting task and were impressed by the high standards demonstrated across the entries generally, with many examples of good buildings delivering their programmes well and contributing to their surroundings. But eventually they settled on the following shortlisted projects (described in summary by their architects) that stood out from the rest, revealing a real diversity of typologies and approaches, and impressive architectural qualities. Keith Williams added: “Arriving at the top 10 was far from easy and all those shortlisted have produced exceptional work.”

The house stands on a steep slope, amongst trees, 700 metres above sea level. The materials of the project create a relationship between the plot and the landscape. The house seems to bite into the mountain: it is deep-rooted to the north and “emancipated” to the south, through an overhang that turns the house to the valley.

The plan of the house is C-shaped with a patio, and irregular. The fourth side is defined by a green level area that creates three forms with variable heights, increasing from north-east, where the volume disappears, inserting itself into the ground.

The green meadows and trees frame the external skin made of corrugated pre-oxidised copper and Accoya wood. The copper, timber and triple glazing of the windows provide a counterpoint that interacts with nature. The ventilated copper wall is modulated with a slight pleating, its non-reflective
surface almost quivering in the light, while the timber of the great splay reflects southern light.

32-33 Great James Street comprises two Grade II* listed, five-storey terraced townhouses built between 1720 and 1724. The office accommodation was outdated and poor quality. The solution was to retain and enhance the grandeur of the terrace and to introduce an entirely new structure in the tight, landlocked space to the rear, creating a dramatic transition from the old to the new.

A copper alloy bronze triangulated roof form sits over this area – its height and form designed to fit key points around the perimeter. In order to maximise the potential of the space and introduce drama, certain elements of the roof shape were pulled upward increasing the internal floor-to-ceiling heights. The patina of the bronze on this contemporary folded roof, as well as courtyard facades and window surrounds, was selected to harmonise with the existing buildings. An asymmetric lofted ceiling sits under the new roof with recessed lighting accentuating the geometric planes. Use of roof lights and glazed access to courtyard areas has ensured that the building is flooded with light.

The buildings serve travellers heading to the Stockholm archipelago and are located in one of the city’s most visited areas opposite the Royal Palace. There are three new buildings: two terminals and one building with a cafe, viewing steps, storage and a recycling station. The buildings are scaled down in relation to the surrounding architecture, maintaining open views of the Royal Palace. The design is based on an elementary form – the cone – framing different views over the water. The cones are combined in different ways to meet the demands of the different operations, resulting in buildings with no specific fronts or backs.

Each building is unique but together they create a cohesive expression for visitors. Exterior facades are covered with burnished brass alloy, accentuating the sculptural form of the buildings with a gradually evolving surface. Glazing by the waiting hall and the sales areas is drawn back to give rain shelter and to provide space for displays. Due to the construction of the buildings a precise expression has been created where guttering and drain pipes can be avoided.

Museum of The Franco-Prussian War of 1870 and The Annexation, France, designed by Bruno Mader Architectes

Monolithic, the new Museum sits quietly in the village of Gravelotte, looking towards the former battlefields. However, it is powerfully differentiated from its surroundings by materiality, affirming its identity. Clad in patinated brass, the building marries a simple plan form with irregular rooflines. The roof folds along east-west axes, creating a dialogue of slopes and fragmenting the volume.

These folds – steps in the roof like steel blades – are gashed with glazed openings to capture the north light. The light coming through the irregular saw-tooth roof illuminates a central double-height entrance hall space in such a way that it feels neither interior nor exterior.

This focal point is a dramatic space, whose dark, irregular walls and lacerated roof are an architectural interpretation of what is represented by war. The huge panels of patinated metal that form the hall’s walls are the same as those used on the facades, providing the building with a powerful identity, coherence and sculptural character.

The Euravenir Tower project occupies the last free parcel of Phase One of the Euralille Area. The plot’s strategic position, located at the intersection of different axes, demanded a sophisticated solution that acts as a hub, uniting the elements gravitating around it. By extending and crossing the axes within the plot, an initial extrusion generated a small tower. By completing the Avenue Le Corbusier, this vertical element is also a corner building on the Place Valladolid signalling the city to approaching drivers.

This architecture has created a new urban space that combines private and public, vertical and horizontal. The facades become a series of windows that provide a 360-degree panorama of the city. Here, a lattice motif is formed by cut-outs in the facades. The copper is used as a kind of fixed edge along the opaque or semi-glazed stretches of the facade. It is also present in the form of perforated panels that help regulate the amount of light penetrating the building.

The unusual site location between the TGV rail tracks – linking Lyon with the rest of Europe – and an urban boulevard, allows the city to fully exhibit its collection. The building must reconcile the need to protect the collection while welcoming the public, encouraging them to enter and engage with its knowhow, as part of the urban and cultural process. The technical challenge is to supply air with a highly stable level of humidity whilst maintaining low energy consumption.

At a city scale, the project forms three ‘beautiful boxes’, housing other boxes – the archive conservations rooms, in turn full of still smaller boxes – the archives themselves. The cubic volumes are made up of precious materials: stone, a golden copper alloy and glass. The central layer encloses the archives with copper alloy embossed panels that give the surface its texture. The top layer contains the offices, behind a ventilated double skin glass envelope, like a lid on a precious casket.

At the front of the elongated structure is the main entrance with a small forecourt. The three-storey building has been lowered four metres below street level in order to create a direct underground access to the adjacent school and to give the extensive hall with a total height of 11.8 metres an appropriate form in the locality.

The building’s appearance is characterised by a facade made of folded, perforated copper plates covering the hall like a semi-transparent veil. The copper sheets are staggered by one folded element at each storey, which structures the front horizontally. The facade is interrupted by glazing on the upper floor at the northeast side and on the ground floor at the southeast side. The former ensures an even and glare-free incidence of daylight in addition to the numerous skylights, while the latter provides a view into the sports hall from the schoolyard.

A deep bond with the landscape and the local traditional buildings can be felt both in the works and homes of the Ahrenshoop artists’ colony. The design concept for the project represents reinterpretation of this vernacular typology into a modern museum structure. Emerging from thatched-roof houses, a constellation of single-room buildings has been developed based on the particular sizes of the actual exhibition rooms. By fusing the roof forms, a sculptural building volume is generated that unites these apparently freestanding structures into a single complex.

The facade is one of the outstanding features of the building. For the external skin, bevelled brass sheets refer to the linear texture of reed thatching. The brass will quickly weather to give a darker surface reminiscent of thatched roofs. The desired surface irregularity was achieved using subtle variations in the profiles and the product develops an unexpectedly varied look.

A 1960s office building has been transformed into a high security building, organised like a Venetian merchant house, with goods loaded at the ground floor, stock and offices above, and, at the highest level, a residence for the owner with a roof terrace. The challenge was to make a building that respects its curtain wall typology, while relating to the historic houses on either side.

A new skin of glass and brass covers the facade, the roof and a small courtyard at the back. On the outside a patterned, perforated brass curtain is hung, incorporating motorised folding elements. Every morning half of the curtain opens, emulating the adjacent historic houses with repeating window reveals in a ‘massive’ wall. After working hours the curtain closes automatically, creating a burglar-proof vault. After dark, dim lighting reveals a modern glass house behind a veil of translucent brass.

House VDV appears simultaneously familiar and strange. The basic volume, consisting of a ground floor and upper level within a pitched roof, alludes to familiar archetypes such as the rural farmhouse or barn. Yet, at the same time, the simplicity of the volume is broken up by large glass facades, establishing relationships with the surrounding trees and listed castle wall surrounding the plot.

Mandatory planning requirements for the plot made sure that the house was conceived as a pavilion. The solution is essentially a garden-house with no front or rear but, instead, two identical facades and a 360-degree experience of the entire plot. The untreated copper cladding will continuously change colour over the years, from bright in the beginning to brown and eventually green at the end. It gives the project a poetic impermanence, which is echoed in the reflection of the surrounding trees in the glass facades. 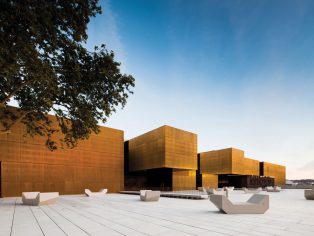  Museum Of The Franco-Prussian War Of 1870 And The Annexation, Gravelotte, France 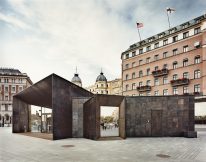 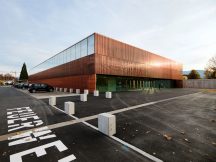