In most European countries architects expect a strong growth of wood and architectural glass.

Especially in Belgium, Germany and France the architects expect wood to be a leading material in the facade construction. Architects in the UK, the Netherlands and Poland expect a growing use of architectural glass as a facade material. In Italy and Spain other trends are noticed for the facade construction: more use of high pressure laminate in Spain and more use of concrete/ plasterwork in Italy. These are some of the conclusions of the European Architectural Barometer report, a quarterly market research among 1,600 architects in eight European countries.

Architects are not only a very important indicator with regards to future building volumes, but also on how these buildings are being build. In the second quarter of this year the European Architectural Barometer has researched the upcoming use of several building materials according to architects European wide. With regard to the facade construction, two trends stand out. First of all the increasing use of wood in Belgium, France and Germany. Architects mention wood the most when asked which material will be used more in the upcoming five years. Another trend can be seen in the UK, the Netherlands and Poland where architects expect a higher usage of architectural glass in the next five years. These trends can not be seen in Italy and Spain. In Italy most architect expects more use of HPL (High Pressure Laminate) whilst in Italy especially concrete/ plasterwork is expected to be more used.

These and many other trends concerning the developments of the European construction market can be found in the European Architectural Barometer, an international market research conducted among 1,600 architects in Europe. This study is conducted in Germany, France, Italy, Spain, United Kingdom, the Netherlands, Belgium and Poland by Arch-Vision four times a year. Besides indicators to forecast the European building volumes, a specific topic is highlighted each quarter. The topic in Q2 2015 was “Architectural Design and Technology trends”. Architects are not only a reliable source for future building volumes information, their role is very important as they have substantial influence on how projects are built and which materials are used. 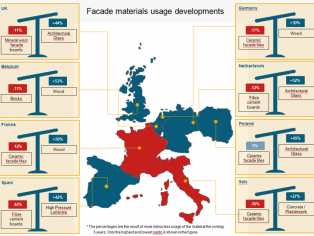