EQUITONE opens up a bright future for inner city school

An EQUITONE architectural fibre cement facade from Marley Eternit has been used to clad a new £17.6 million, RIBA award-winning Academy in inner-city Birmingham.

EQUITONE and was specified by architects de Rijke Marsh Morgan (dRMM) for the new BREEAM ‘Very Good’ St Albans Academy, which has been awarded both a RIBA West Midlands Regional and a National Award.

EQUITONE brings together the Marley Eternit ranges , , and to give these architectural materials an identity that is recognised as the material of choice to achieve appealing and inspiring buildings.

Fibre cement EQUITONE was specified by the architects in vivid colours to emphasise the two axes within the school and the entrance area, which connect the two small “schools within a school” to the sixth form and specialist teaching areas with EQUITONE used as a darker finish to contrast the bright colours of EQUITONE .

Four colours of EQUITONE were chosen by the architects for the facade and fixed in vertical bands of varying widths, responding to the masonry of the adjacent Grade II listed St Albans the Martyr Church, to which the Academy owes its founding and inclusive ethos. Paradoxically, the material also relates to the adjacent industrial warehouses as the project was intended to anticipate the future renegeneration of this deprived neighbourhood in Central Birmingham, demonstrating how an EQUITONE fibre cement facade can bridge the gap between contemporary and traditional architecture.

“We selected EQUITONE because it is expressive, colourful, and economic. We worked strictly with standard panel widths and half widths to avoid waste, and set the windows around this to maximise efficiency of the material. The window reveals and soffit panels were also in colour to give the building a sense of solidity.”

The vision for St Albans Academy was to create two small schools within a school, each with their own headteacher, to accommodate 800 pupils aged 11-18. Two small schools on one side of the building are linked with specialist learning spaces, on the other by a spacious, dramatic central atrium.

Marley Eternit fibre cement architectural facades offer an installed life expectancy of at least 50 years and can achieve an A+ rating as defined in the BRE Green Guide to Specification based on generic rating for autoclaved fibre cement single sheet – (Element Ref: 80623042, 806230422, 806230447, 806230450).

The clients on this project were Lend Lease, Birmingham Local Education Partnership and Ark. The main contractor was Lend Lease and the specialist contractor responsible for installing the cladding was Horbury Building Systems.

For further information on EQUITONE from Marley Eternit just ask ME at: www.equitone.co.uk or call ME on 01283 722588. You can also follow ME on Twitter @MarleyEternit. If it matters to you it matters to us, that’s why with ME it’s all about you. 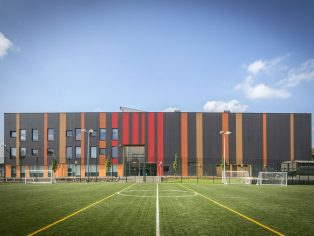