The Larkfleet Group of Companies has applied for planning permission to build an experimental house that could rise on jacks above flood waters. If tests are successful the house could provide a model that would enable housebuilding on thousands of sites across the UK which at present cannot be developed because of the risk of flooding.

If planning permission is granted by South Holland District Council, Larkfleet plans to build a three-bedroom detached house in Weston Hills, near Spalding, Lincolnshire that can be raised up to 1.5 metres above ground level by eight mechanical jacks.

Work on constructing the house, which will sit on a steel ring beam in place of conventional foundations, could begin early in 2017. Experiments with raising and lowering the house – including testing long-term maintenance and operation of the jacking system – will run for up to five years.

Because the house will be of modular steel-frame design it can then be disassembled and re-erected on another site on conventional foundations as a family residence.

It is anticipated that houses of this design would be jacked up well ahead of the arrival of flood waters, based on advance warnings from organisations such as the Environment Agency. However, the mechanical jacking system – powered by a central motor, gear box and drive shafts – could lift the 65 tonne house to the full 1.5 metre height above ground in less than five minutes.

Rooftop solar panels and a battery would provide the house with some continuing electricity supply when raised above the ground and the water and sewage would remain connected through flexible hoses. However, it is not envisaged that residents would remain in occupation during floods. Instead, the householders would pack up, lock up and jack up the home before taking refuge in temporary accommodation on higher ground elsewhere.

Karl Hick, CEO of The Larkfleet Group of Companies, said:

“The elevating house effectively eliminates the risk of flood damage to homes so that more land across the country can be approved for future home building. This will help to tackle the ‘housing crisis’ that is being caused by the demand for new housing far exceeding the supply.”

Larkfleet is a privately-owned house building and development organisation with a strong record in creating high quality homes and communities. It specialises in building energy-efficient housing and continually invests in research and the development of innovative new sustainable building designs, materials and construction methods.

UK and international patents for the ‘elevating house’ are pending. 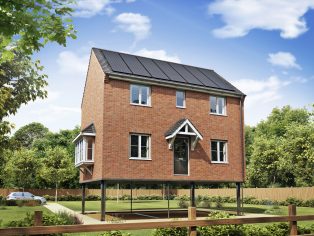