A University of Wolverhampton student from the Dominican Republic has won a national award for an essay she wrote on construction management.

Angelica Salas was among 23 students from the Central American country who came to Wolverhampton last year to study Masters programs as part of an initiative sponsored by her government.

Angelica 22, from Santo Domingo, is studying an MSc in Civil Engineering Management and was encouraged to enter the national student essay competition run by the Joint Tribunals Commission (JCT).

Working to the title of What can be done to simplify construction? her entry looked at how the concepts of lean construction and Building Information Modelling (BIM) could be applied to the design stages of a project to simplify the whole construction process.

Judges picked out her essay as the outstanding entry and Angelica received a £1,000 cash prize at an awards ceremony at the Royal Institute of British Architects in London on Thursday 12 June 2014, beating off competition from students from Kings College, London and University of Cambridge.

“I couldn’t believe it when I was told that I had been picked out as the winner. When I entered I never even considered that my entry may win.

“It feels amazing to know that I have won a competition open to students from across the UK. My family and friends went crazy when I told them the news.

“I’ve really enjoyed my time at the University of Wolverhampton, it really has been a great opportunity. The weather and life is very different than back home but it has been easy to adapt to.”

When Angelica finishes her course in October she plans to stay in Wolverhampton to do a PhD in transport at the University.

“This is an area I have become very interested in during my MSc and I think that I can gain and develop vital knowledge and skills that I can then take back to the Dominican Republic and help my country.

“I would definitely recommend studying at a UK university like Wolverhampton.”

Angela Nash, Senior Lecturer in Architecture and Built Environment at the University said:

“Angelica’s essay formed part of her assessment for a postgraduate module in Construction Project Management Strategy. The assessment was composed with entry to this competition in mind and her essay was so good that I recommended that she enter. I am delighted that she did, with only hours to spare to the deadline. I’d like to congratulate Angelica both on the award and for reacting swiftly to a wonderful opportunity.”

A group of 23 students from the Dominican arrived in October 2013 and are studying a range of subjects including Civil Engineering, Public Health, Computer Science, Construction Project Management and Biomedical Science.

It followed on from an agreement struck last year between the University and the country’s Ministry of Education, Science and Technology for a group of postgraduate students to study in Wolverhampton for a year.

It was the first agreement of its type for a UK university and is part of the country’s scholarship programme. 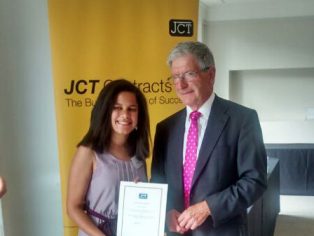