Paul Sands of Stokvis Energy Systems reflects on the reasons social housing landlords are returning to the use of centralised heating systems.

In recent years our social housing sector has ‘rediscovered’ an appetite for district heating after decades of adverse publicity and seemingly cheaper alternatives had persuaded many landlords to replace the systems; normally with individual gas boilers.

There was no single Eureka moment but rather a steady stream of economic and technical reasons which emerged, all of which in some way pointed towards the benefits of district communal heating. The most prominent of these was the launch of the new Code of Practice on Heat Networks by CIBSE, as it set out in detail the way in which such schemes can and should perform, the way they should be designed and the very many different heat sources they can draw on.

Even though domestic boilers have improved dramatically in efficiency and reliability – thanks to condensing technology and much better control systems – for housing associations, there remains the elephant in the room. There is the logistical nightmare of annual gas safety inspections, with a percentage of tenants always reluctant to cooperate with access for the heating engineer. There was also the lifespan of most boiler types remaining around ten years, making their whole life cost very high.

So we have to find the most efficient means possible of utilising the gas or other fuel that we do burn: and this can be demonstrated through properly specified district communal schemes either within a block of flats or across larger developments.

Buried deep within the CIBSE Code of Practice is guidance on the sizing or capacity of systems. When looking at reasonably well insulated properties, it is the domestic hot water consumption, rather than space heating load which generally dictates the output of stand-alone boilers.

Having to consider residents using more than one bathroom simultaneously as a tap is running in the kitchen sees boilers being routinely oversized. However, this tendency can be resisted, or at least mitigated in communal schemes. Specifiers of district heating schemes can not only calculate on a much lower average peak demand when considering 50, 100 or perhaps 500 homes, but they have the option to divide up the load between different technologies. They can meet the base load for a scheme using biomass or a bank of heat pumps; perhaps linked to boreholes or even a water source such as a river.

Solar thermal panels could also be linked into this eco-friendly capacity, able to deal with demand on all but the coldest winter days at which point the system would then switch on a gas fired boiler. Combined heat and power or CHP are also proving popular and a couple of schemes unveiled last year will make use of “waste” heat from incinerators or industry. So, with a highly energy-efficient and hopefully green heat source identified, the other major task is distributing it effectively to residents which is where HIUs present the ideal answer.

Heat Interface Units facilitate the exchange of energy between the district heating mains and the individual dwellings normally allowing the domestic consumption to be monitored or metered and isolated when maintenance work is necessary. Crucially, there is no annual gas safety inspection and the HIU can be mounted in a landlord cupboard, accessible from outside the dwelling, and even fitted with a wireless link so that the meter can be read remotely.

Normally supplied as a custom-designed unit to suit a scheme’s particular requirements, Stokvis H-Series HIUs feature very efficient plate heat exchangers to transfer energy to the dwelling’s private circuit. They can provide domestic hot water, as well as heating, either direct or via a cylinder. Response is both rapid and reliable, while customers further benefit from lower energy bills.

Changes to benefit payments and funding levels from central Government are putting an increased financial strain on housing associations at a time when the demand for affordable housing is rising rapidly. Taken in tandem with the UK’s looming energy crisis, district heating schemes, featuring high efficiency and easy to manage heat interface units, offer a valuable means of recovering control over stretched budgets. 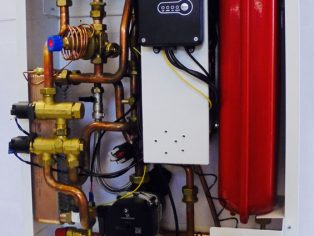