Director of the Year Award for Head of Larkfleet

The boss of Bourne-based building firm Larkfleet Group is celebrating after winning two awards at the Institute of Directors (IoD) East Midlands Director of the Year awards.

Karl Hick was named overall East Midlands Director of the Year and also won the Director of the Year in the Large Company category. He was among 14 directors from Derbyshire, Leicestershire, Lincolnshire, Northamptonshire and Nottinghamshire who were named as leaders in their business fields.

“All our finalists have demonstrated excellence in leadership. But they also have the personal qualities and business acumen that will help deliver growth in the regional and national economy. They show exactly why George Osborne and others are referring to the ‘Midlands Engine’.”

“To ensure that the business stays ahead of its competitors, this director set up a R&D team to lead the development of new technologies in housing, waste and energy, wind and solar power. Some of the research has the potential to revolutionise the future of the construction industry.”

“This director has always had a ‘hands on’ management style but as the business grew recognised the need to develop an excellent management team to help lead it forward. There is also a strong track record of investing in people, including apprentices and more recently graduate trainees to recruit, train and retain future senior management talent.” 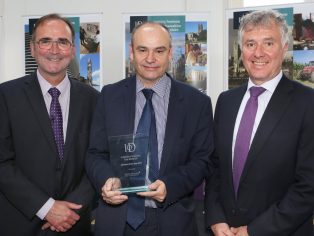