Dipping has the edge over blasting

If a priceless piece of architecture has not been renovated for over 100 years, how can you clean it thoroughly without losing any of its decorative features? Forget shot blasting and dip it in a tank, says Adrian McMurray, MD of chemical cleaning company Surface Processing Limited

‘God is in the details’ believed Ludwig Mies van der Rohe, one of the great figures of 20th century architecture. His words were directed at con- temporary designers but his dictum is equally resonant for restorers and conservators. Their goal is to preserve detail, if not rediscover it, during the conservation of a building.

The magnificent south entrance gates of the Piece Hall – Halifax’s Georgian masterpiece and one of only two fully intact cloth halls in Europe – were made in 1871 but today look pristine following an extensive repair and renovation programme. The first task of the conservation team, charged with restoring them to their original condition and decorative scheme, was to remove the layers of old paint, grime and rust that had accumulated over decades.

The worst thing they could have done was to use the traditional method of shot blasting. This tends to round off sharp edges on wrought iron objects and structures, meaning intricate detailing and design elements can be lost for good. Moreover, it’s difficult to remove paint from inside box sections and voids, awkward corners, and all the nooks and crannies.

An attrition method like this will also attack the substrate, so not only do you lose definition but the metal surface starts to deteriorate as well. There is another drawback: cast iron, of which the Piece Hall’s beautiful gate panels depicting John the Baptist are made, can crack if blasted. And while the process itself is cheap, it can be very messy – you need to factor in the on-site clean-up costs.

The conservators opted for a better way – fully immersive chemical cleaning. This process is made up of several washing and rinsing stages as the item is dipped in a range of different cleaning fluids. It is far gentler and more effective than high-pressure cleaning at removing paint, varnishes, rust, grease, sealants, adhesives, scale, oils, acids, and other organic and inorganic matter. The stripped metal will look bright and shiny.

All this can be accomplished without losing any decoration or ornate features – fine detailing painted over multiple times and not seen for years can often be uncovered too – or com-promising the integrity of the substrate. The chemicals used are safe to use on a variety of ferrous and non-ferrous metals including brass, copper, steel, aluminium and iron. The temperatures involved at any stage are relatively low – no more than 80°C – so you don’t have to worry either about distortion or softening of the metal, which might occur with high-temperature treatments. Objects several metres in length and weighing several tonnes can be treated.

A further advantage is that you are now working with bare and stabilised metal surfaces. Wear and tear, corrosion damage or earlier repairs are clearly identifiable. If new repairs are needed, you can achieve a much better quality of welding and weld integrity because there are none of the complications encountered with paint, sealants and other materials. As a result, structural rigidity can be improved markedly.

Of course, decontamination, rust removal and cleaning are just the first steps of the restoration process. The next stage, priming, is particularly important and here another modern technique is being increasingly relied upon for restoration projects.

Called electrophoretic coating or simply ‘e-coating’, this again involves fully immersing the item, ensuring you get equal coverage of the primer, even in those hard-to-reach places. Then 400 volts is passed through the tank, which fully bonds a uniform, durable coating of 28 microns to the metal. This compares to a thickness of 60 to 70 microns you would normally get from a galvanized finish. The thinner e-coating follows contours, shapes and edges more faithfully, giving better protection and a longer-lasting paint finish. It also means you don’t lose detail after painting; even threaded items will still work after they are painted.

E-coating is widely regarded to be the best anti-corrosion primer. That’s why 97 per cent of the world’s car manufacturers apply it to their vehicles to provide long-term protection against rust. For complex metal objects and structures, there is nothing better.

Chemical immersion followed by e-coating is proving a popular combination for renovation projects on modern buildings where shot blasting and conventional coating have failed to remove rust and then prevent it reforming on, for example, balcony panels made from perforated stainless steel.

However a coating or primer is applied, cleaning by chemical immersion is still more practical and more cost-effective in the long term. It provides the perfect foundation for any rebuild or restoration project where a key priority is the preservation of an object’s historic character. 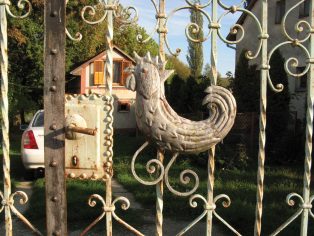 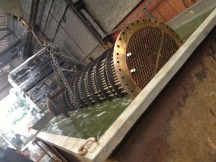