With an ageing population, dementia is on the rise in the UK. Stuart Reynolds of AKW discusses how housebuilders can act on this to create bathrooms that are dementia-friendly, promoting both dignity and safety.

The number of people with dementia in the UK will increase to over one million by 2025 and over two million by 2050. There are a variety of issues for those with the condition, including memory loss, ‘fuzzy’ thoughts, disorientation, struggling to follow conversations or instructions, and mood and personality changes. High surveillance is needed in the bathroom in particular, however it is possible to create ‘dementia-friendly bathrooms’, using a person-centric approach to design.

Listed below are the major dementia challenges that can be overcome with good design.

Consistent flooring shades are crucial as a person with dementia can interpret a change in floor colour as a step, leading to trips or falls on a level surface. Dark colours can seem like gaping holes and a speckled effect can appear to be flecks of dirt. Ultimately, a light, uniform colour, anti-slip flooring is best.

Incorporating contrasting colours in bathroom walls and fixtures can help users with dementia to effectively define and locate separate sections of the room, such as the shower and toilet areas. For example, contrast should be used to help differentiate a grab bar from a wall and the toilet seat from the pan. A minimum LRV (light reflecting value) of 30 points of difference between colours is needed.

Sufficient light levels are needed in the areas where specific tasks are undertaken. This means that a mix of task-specific lighting and increased overall ambient lighting will ensure the bathroom is sufficiently lit. People with both sight loss and dementia have been shown to benefit from increased light levels in the bathroom of 600-700 lumens per m2 for general lighting and 700-800 lumens per m2 for task lighting.

Mirrored surfaces can be another danger. For a number of people with dementia, the reflection of their faces can make them think another person is in the room with them. To overcome this, it is wise to fit a roller blind above the sink, so the mirror can be covered when necessary.

As dementia progresses so too does the loss of safety awareness, making those with the condition especially susceptible to scalding:

People with dementia are twice as likely to fall as their peers, as a result:

Short-term memory loss and forgetfulness can of course have a negative impact. For example, the risk of flooding if a tap or the shower are left on after use are significantly increased. Because of this:

• Include flood-proof plugs in the basins and opt for showers that have an auto shut-off function
• Use dementia-friendly showers that automatically shut down after 30 minutes of use, to avoid accidental overflows

Retro memory is also something to consider. People with dementia have a good long- term memory, and so are more familiar with fixtures and fittings that are from the past:

• Incorporate traditionally designed fixtures and fittings, such as cross-headed taps and a conventional toilet flush rather than modern push-button devices
• Install basins that are large enough to accommodate a toothbrush mug, to make sure users feel that the items in the space are as familiar and comfortable as possible.

A dementia-friendly bathroom is not just about highlighting risk areas and resolving issues, but it is about promoting independence. With a well-designed bathroom space, a person’s wellbeing and confidence are boosted, enabling them to engage more readily in day-to-day activities in a high- risk space. With a little time and investment dementia-friendly bathrooms have the potential to promote independence, as well as to help reduce accidents in new homes across the UK.

Stuart Reynolds is head of product and marketing at AKW 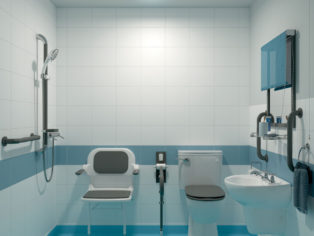 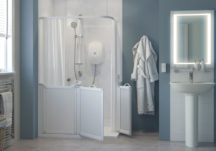