Deal opens the door to new standards in doorset finishes

Architects and specifiers can now access the best in doorset quality, thanks to a deal which will bring a unique finishing process to the UK for the first time.

Aspex Doorsets has secured the UK distribution rights for Svedex – a European manufacturer specialising in pre-finished interior doorsets for apartments and residential developments.

Svedex doors feature a trademark lacquering process known as ‘Superlak’, originally developed by Ford and BASF for use in the motor industry.

The process uses electrostatic charging to coat the surface and instant drying to achieve a consistently blemish free white lacquer finish. The doors can then be installed into the finished wall, with a fit time of under 30 minutes.

Based in the Netherlands and Germany, Svedex sells in excess of 600,000 of the doors each year.

Aspex Doorsets is part of architectural ironmongery supplier Aspex UK, which launched the new division in January to provide a one-stop-shop for ironmongery and doorsets for specifiers and contractors nationwide.

“We are delighted to be working with Svedex, and have already received our first order.

“The doors won’t need painting on site, reducing the number of contractors involved and making the whole process more efficient. The product and installation cost of Superlak doors is comparable with the traditional build process, making them a welcome option for any project manager.”

As well as being blemish free, Superlak is resistant to sunlight, durable and wear-resistant. Each doorset is guaranteed with a 10 year warranty.

“Our trademarked lacquering process has streamlined build programmes across Europe, enabling architects to achieve the finish they want to time, and to budget.

“We are excited about our partnership with Aspex Doorsets, and look forward to introducing our product on a widespread basis to the UK.” 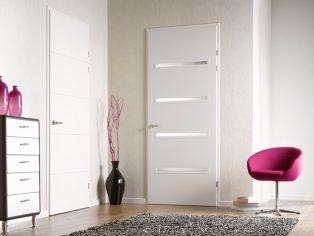