Dangerous territory: how a dream home turned into a lucky escape for one Cornish family

Buying a new home is one of the most exciting yet stressful experiences, with solicitors, estate agents and lenders to contend with. While dealing with what lies above ground is often difficult enough, for many homebuyers, tackling what lies underground can be an added challenge. Hidden dangers having the potential to wipe thousands off a home’s values, as well as placing the property at significant risk of future damage, or in the worst case, complete collapse.

This was an issue facing Dr Mark Vaughan and his wife, after finding their dream home in the quaint Cornwall village of St Stephen. Just a few miles from the old market town of St Austell and located near some of Cornwall’s most picturesque spots, Mark and his wife were both keen to move in to the property as soon as possible.

However, once known as the mining capital of the world, Cornwall is dotted with thousands of decaying, abandoned mines – a reminder of the once booming industry. Mark’s dream property was also located in an area famed for its rich china clay quarries, as well as being only one mile from one of the largest old mines in the region, South Terras – one of the biggest uranium mines, active for over six decades, from 1870 – 1930.

“Having bought several properties over the years in Cornwall, we know that it is very important to investigate what is under or around a home, not only to protect our investment, but also to ensure that the buildings are safe and secure, with no risk of sink holes or subsidence” said Mark.

Having looked at old mining maps and discovering that an old mining shaft in the home’s garden had opened previously in 1991, Mark was keen to get an expert opinion before committing to purchasing the property.

“The first mining search firm I approached, said that the property wasn’t at risk from old mining shafts”, said Mark, “but I wanted to double check this, so we asked Mining Searches UK to conduct a basic search of the surrounding land, including the garden.”

A trusted team of specialist mining engineers, geologists and historians, Mining Searches UK assess the mining risk of a piece of land, property or site. With 40 years of innovation and experience, the expert team provides predictive mining search data, quickly and efficiently, offering clients peace of mind, value and support – from homebuyers and solicitors, to developers and conveyancers.

Conducting an initial desk search on the property from its office, using its extensive archive containing over 2 million data points, to determine if the property was at risk from any old mining workings, such as shafts, the team picked up some serious issues.

“After buying the property, the current homeowners landscaped the garden, creating a flat, neat lawn area. However, after two months, you could clearly see two hollows in the lawn, located directly above the mining voids, demonstrating the risks and instability of the land which surrounds them.”

To understand the extent of the potential issues, as well as to provide assurances to Mark before he purchased the property, Mining Searches UK recommended undertaking a drilling investigation, working with the current homeowners. Taking between 1-4 days, this type of investigation involves drilling holes beneath in risk areas, with information gathered helping to provide more detail on the risks identified following the basic search.

The drilling investigation confirmed the presence of a significant mining feature extending across the entire rear garden, as well as uncovering a voided and deep mine shaft in the driveway of the property.

“The mining features uncovered were characteristic of very early mining in Cornwall, with this type rarely, if ever, recorded – which is likely why it wouldn’t show up on other basic surveys. While these features can pose a slight risk of subsidence, the presence of the other voided sections posed a greater danger of collapse to the garden, and even potentially the property itself.”

While the mine shaft had previously thought to have been capped – a process which involves securing a mine shaft, by sealing it with a significant amount of concrete – the investigation found that the concrete was damaged and crumbling, meaning that the cap needed to be replaced to ensure that it would not impact the property in the future.

“We recommended excavating the shaft and surface workings, securing them with a concrete taper plug. We can provide detailed specifications and designs for these works, as well as reports which provides evidence that the mine features identified have been secured. Our aim is to make the property safe, while also ensuring future developments can take place without any risk” said Ryan Hichens from Mining Searches UK.

“The shaft found from the drilling work looked to be approximately 11 x 16 feet – that’s not a little shaft and is big enough to fit (and lose) a transit van. This is not just in relation to the property but is a known problem in the general area. In the worst case, a big hole could open outside someone’s front door, and is enough to risk severe injury should a person fall into it. While sadly often overlooked or missed by planning and building regulation departments, this demonstrates the importance of firms like Mining Searches UK and its expert team.”

While Mining Searches UK could solve the mining issues, Mark was faced with a difficult decision, with the cost of rectifying the problems adding a complication to what should have been a relatively simple property purchase.

“If the mining problems were not fixed, the value of the property could drop by up to, or even over £100,000, as well as being in danger of having future structural complications, making it a financial, legal and safety risk.

“The cost of the property was more than £250,000 and following lengthy conversations with the property owners, they were not willing to fix the problems, or drop the price. As a result, we unfortunately had to pull out of the sale.

“In an area well known for its mining past, the developers which originally bought the site should have secured the land before passing it on to site owners to not only protect future residents, but to also safeguard property investments and future development of the land”, said Mark.

Mark eventually bought another property in St Austell, again using Mining Searches UK prior to the purchase – with a full and detailed mining report provided within an hour. Thankfully for Mark, his new property was not at risk from any old mine workings, with Mark adding:

“The Mining Searches UK team is efficient, gathering as much information as they can, before providing a detailed report on any risks or issues found.”

While mining is not often a consideration for many when buying a property, it can be a crucial factor when deciding on a dream home, with Ryan, Mining Searches UK saying:

“It is vital that home and land buyers instruct mining searches before making a significant financial investment. Old, abandoned mines have the potential to not only wipe hundreds of thousands off a home’s value, but if not identified and remediated, can be a costly process to fix further down the line.

“Although the results of a mining search can often uncover unwelcome information, knowledge really is power, and it is crucial to detect and fix potential problems before they occur. While many of the UK’s mines closed decades ago, they are still a key consideration in today’s property and development industry and should never be ignored or underestimated.” 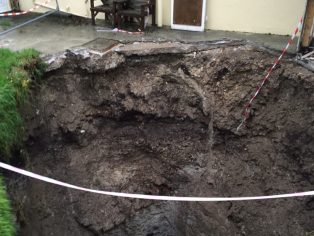 The destruction a collapsed mine shaft can cause