Over the past 12 months, a new landmark has arrived on the Portsmouth shoreline – Land Rover BAR’s headquarters, a building which will play host to a team that is making a bid to win sailing’s top prize.

Developing a yacht and crew good enough to enter and win the America’s Cup requires a multi-million-pound investment.

Part of that investment, supported by £6.5 million of government funding, includes establishing a home for the team, which employs over 70 people across its commercial, design and shore support units, not forgetting the race crew.

The team’s aim was to build an HQ that was as advanced as the racing vessel that would be designed and built at the site, and achieving excellent standards of sustainability was a key part of this. The 74,000 ft² base has been built to the BREEAM Excellent standard, a goal currently achieved by less than 10 per cent of new non-domestic buildings, and the 2,005 ft² of glazing used in the scheme has played a major role in this achievement.

Two different specifications of glass were used in the project, one for the areas of glazing exposed to direct sunlight and another for windows sitting behind the semi-transparent fabric skin that will surround much of the building, evoking the sails of a racing yacht.

For the exposed glazing, Pilkington Suncool™ solar-control glass was used.

“The double-glazed units that make up both specifications will provide excellent thermal insulation, reducing heat-loss from the building in the colder months.

“However, in the summer, when the large expanse of glazing could make over-heating more of a concern, the advanced solar-control coating on the exposed glass will limit the amount of energy entering the building, reducing the need for artificial cooling. At the same time, it also delivers a high level of transparency, which will make the most of the stunning views out to sea.”

Because the units are full-height and, in some cases, overhead, safety was an important consideration on the project. This was addressed by specifying 8.8mm Pilkington Optilam™ laminated glass for the inner pane in all of the units.

A Polyvinyl Butyral (PVB) interlayer between two sheets of glass ensures the integrity of the glass is maintained, holding any broken pieces of glass together should any damage occur. The outer pane was heat soaked and toughened to further improve safety and security of the glazing.

“What has been achieved with this project in the relatively short time since construction began is truly impressive, and we were under pressure to deliver to excellent standards of quality, to tight timescales which, using Pilkington products, we were able to do.

“The building will be a stunning focal point to the outstanding technical capabilities and sporting excellence of the team, and I believe the glazing we have delivered, working closely with Pilkington United Kingdom Limited is a more than worthy component of the project.”

The building will feature a number of other cutting-edge sustainability enhancing features, including an on-site solar PV system that is expected to provide a large percentage of the team’s electricity requirements.

The first stage in the America’s Cup World Series – the global competition that will begin to determine which team can compete with US-based incumbent Oracle Team USA in 2017 – was hosted in Portsmouth from July 23rd-26th.

This marked the start of a two-year-long journey during which heralded British Olympian, Sir Ben Ainslie and his team will aim to become the first British team to bring home the Cup in its 164-year history. 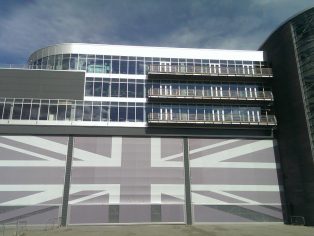