Something affecting everyone is climate change, the resulting increased rainfall and subsequent flooding.  The Pitt Review into the summer 2007 floods found that more than two thirds of the 57,000 homes affected were flooded by surface water runoff, not overflowing rivers. Kevin Weston, managing director of SureSet Permeable Paving talks about the welcomed rise of permeable ground reinforcement options

From the US Army to your driveway
In September 1975, feasibility testing of laying approach roads over soft ground by the US Army led to the emergence of a new class of ground reinforcement: cellular grid structures.

Within five years’ they were considered an important technology when applied to load support because, unlike conventional methods that involved excavating to install a sub-base capable of supporting vehicular traffic, grid structures provided an environmentally friendly above ground option.

Permeable ground reinforcement: cellular grid structures
Since the 2008 Flood and Water Management Act encouraged the uptake of Sustainable Drainage Systems (SuDS), and the subsequent introduction of specific Supplementary Planning Guidance or Conditions (by planning authorities) to secure its implementation, the demand for grid structures has been steadily increasing.

The last few years in particular have seen a rise in the use of crushed rock or gravel within grid structures – resulting in a more stable area and reducing issues with loose gravel migrating into roads, pathways and drains.

Grid structures can be used in three ways:

It also delivers an aesthetically pleasing durable surface that allows natural drainage. The permeable resin bound paving layer does not restrict flow through of surface water.

Environmental benefits
Made from 100 per cent recycled material (HDPE), grid structures create a fully permeable reinforced stable base, without the need for a cementitous or bitumen based products.

HDPE is inert and stable, with an expected lifespan of over 50 years.

CIRIA, the leading body in SuDS research, states that a permeable surface can remove 60-95 per cent of suspended solids and 70-90 per cent of hydrocarbons.

With a grid structure being built-up rather than excavated down, the no dig situation eliminates potential damage to trees and plants.

No digging and reducing the amount and type of infill a grid structure requires, reduces the need for heavy machinery. This has a knock on effect on pollution and the carbon footprint and minimises on-site disruption from dust, erosion and runoff.

Strength
Grid structures can transfer loads across the interlocking units to reduce dynamic load impact from traffic, some up to 400t/m².

Compliant with SuDS
Capturing surface run-off and efficiently returning it back to the water table eliminates the need for traditional and often expensive drainage systems.

Quicker, easier and cheaper to install
With no need to install a separate layer the ‘dig down’ time is reduced and without the need for heavy installation machinery and there is little to no noise pollution.

Control of water run-off
Permeable surfaces allow water to pass into the underlying sub-base to be stored, channelled or dispersed into the ground, onto the next stage of SuDS or a drainage system.

Laying a grid structure
The grids are installed with pegs that tie the cells together anchoring them in place or using a click-together system that connect the cells. From the top down there are four layers to a fully permeable surface – each one a crucial part of the reinforcement and filtration system.

Second layer
Is the in-filled crushed rock or gravel within the grid structure.

Third layer
Is the sub-base and usually constructed from a free-draining material. The depth varies according to its planned use and conditions of the ground, but is generally between 75mm and 200mm.

For vehicular traffic, a Type 3 sub-base material can be used which has lower fines content when compared to traditional Type 1, which promotes drainage within the system. On projects where quicker drainage is required, the sub-base will most likely consist of coarser gravel.

Fourth layer
After the removal of vegetation and debris, a level and compacted sub-grade is created. The sub-grade is the bottom layer over which a geo-textile membrane layer is installed to prevent the upward migration of fine soil particles. 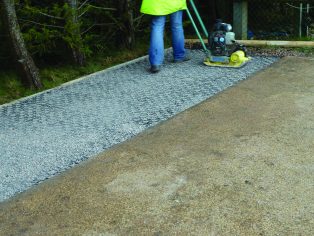