Could modular roofing be the solution to the housing crisis?

The housing crisis is something that has been discussed extensively in the media over the last few years and the ambitious target of 200,000 houses per annum means that we will need to employ new methods of construction if we hope to make any headway in the coming years.

David Patrick, head of marketing at Redland, discusses modular roofing systems and analyses their viability as an alternative method of building

During the build up to the general election, Brandon Lewis, Housing and Planning Minister, was vocal about his intention to explore and potentially adopt new and innovative building practices with the aim of improving the levels of speed and efficiency at which we are able to build homes.

Modular construction is not a particularly new concept, however, recent advancements in the technologies that are used, both in the manufacturing and design process; make this viable alternative to the traditional methods of building.

In the past modular construction was mainly used for the mass construction of generic buildings such as chain restaurants to save both time and money. There was no need to put thought into individualising each building because they were a part of larger branding plans. When it comes to building the family home, there needs to be a certain amount of unique style to make it a more appealing to a prospective buyer. Since the design of a house is different for every project, there is no one-size-fits-all solution in the housebuilder market. Having to manufacture individual houses on a project-to-project basis makes modular construction as equally complex as the current methods in a lot of ways.

Applying the principals of modular construction to pitched roofing is a much newer practice and it had piqued the interest of housebuilders and contractors all over. The main benefit of this method is the time that can be saved during the installation and the reduction in time it takes to waterproof the buildings onsite. The importance of this would be most appreciated in the parts of the UK where the weather conditions are unpredictable and speed is vital.

There are currently multiple methods of modular roofing being used on various projects. One such method, recently adopted by Medical Architecture on the multi-award-winning psychiatric hospital, Hopewood Park, was to use roofing cassettes where the tiling was completed at ground level before being lifted onto the roof. The Senior Architect on the project, Paul Yeomans, was trialling modular roofing in an effort to reduce the amount of time that was spent working at height and reduce the risk of accidents on site. A design for the roof was drawn up whereby the structure could be installed without the use of scaffolding.

“We decided to use pre-tiled cassettes that could be lifted up to the roof and fixed together with minimal time spent on the roof itself. We felt that this was the best way to deliver a visually appealing roof whilst minimising the opportunity for injury to the workforce.”

Constructing the majority of the roof at a ground level reduces the risk of injury, which is a big benefit to the industry considering the most common cause of accidents in the work place between 2013/2014 was falling from heights, with nearly three in 10 resulting in death.

However, the method of modular roofing that was used on Hopewood Park was not a seamless process in terms of logistics and practicality. The main problem being that the current tiles on the market are designed to be laid using traditional roofing practices and getting them to fit together in a different way is very difficult.

“This was a very challenging project. It was crucial that the cassettes were tiled to millimetre precision to ensure the interlocks of the tiles were maintained when they were lifted onto the roofs. It takes a lot of extra work to get the roof up to the standards imposed in BS 5534, the new code of practice for roof slating and tiling. There isn’t enough awareness within the industry about the methods of roofing proposed in the new code of practice, never mind incorporating it into modular construction. My own view is that modular roofs can work, just not in every situation.”

Like most new ideas, there are lessons to be learnt before there can be a clear solution. Trial and error is an important part of change and modular roofing is no different. There have been projects where modular roofing was a big success.

When Fife County Council undertook the task of converting their existing housing stock into new housing and flats, they used modular roofing to combat the harsh and unpredictable weather conditions, as well as reduce the amount of time needed to complete each house. The runaway success of the project has prompted other housebuilders in the region to adopt this system, proving that it can provide a viable alternative to traditional roofing.

Modular roofing certainly has a place in the industry and with a bit of time spent on research and development, we can perfect the methodology. In a time where speed is of the upmost importance, we are in desperate need of alternatives and modular roofing provides a great opportunity. Though it is still in its infancy, it wouldn’t take much to take it to mainstream roofing. One of the biggest barriers is that the tiles are not designed for this method of roofing and getting them to work in line with modular construction takes a lot of additional work.

Only time will tell and it will be interesting to see where the industry is at with modular roofing in a decade or so. 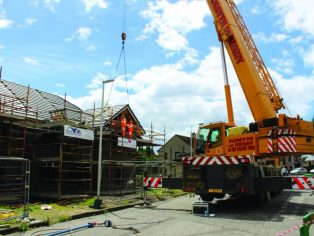