The Mersey Gateway Project has reached an important milestone with work starting on the construction of a temporary trestle bridge at Wigg Island in Runcorn.

Once built, the trestle structure will stretch across the River Mersey, providing construction teams access to the estuary so that they can start work on building the new £600m bridge. The temporary trestle bridge will be some 1,000 metres long and 9 metres wide when complete.

Merseylink has awarded north west firm SPI Appleton with a multi-million pound contract for the construction works, which involves foundation piling and building the trestle bridge.

The progress comes on the back of last months announcement from Chancellor George Osborne that both bridges will be free to all Halton residents.

Approximately 140 steel piles will be driven around 16 metres into the ground to support the temporary bridge. Each pile measures 20 metres long and weighs 3 tons. The initial part of the work involved foundation pile testing to ensure that the structure can be safely supported.

Work is also underway in nearby Northwich, where hundreds of concrete slabs are being produced for the bridge roadway, and in Warrington, where the trestle frame is being made.

Similar construction activity to build the trestle bridge at Spike Island on the northern side of the river will begin later this month. The two structures will meet in the middle of the river in early 2015.

Activity on the Mersey Gateway Project has visibly ramped up recently with the arrival of two large cranes, which were transported on a barge up the Manchester ship canal from Liverpool Docks. A site compound has also been created on Wigg Island.

“It is great to see the first real signs of construction activity taking place in the estuary. The Mersey Gateway is becoming a reality, however it’s important to remember that it’s not just a physical structure. The bridge will transform our local area, connecting communities and bringing regeneration and investment opportunities throughout Halton and the Liverpool city-region.”

“This is a significant event for Merseylink and highlights the progress we are making in our challenging three-and-a-half-year construction programme. We have the installation of the trestle at the estuary and the start of the associated road infrastructure as evidenced by the recent works at Junction 12 of the M56. We will be working closely with all parties to keep them informed, especially where the works could affect road users.”

The next few months will also see work starting on:

When it opens in 2017, both the new bridge and the Silver Jubilee Bridge will be tolled, but both bridges will be free to all Halton residents. 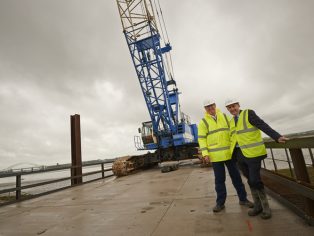