A 40,000 sq ft building which was the second largest single commercial office development commenced outside of London last year has been completed by Midas Group in North Somerset.

The £6.2million project has provided a new central support office for Knightstone Housing Group and will become home to 300 of their staff who were previously spread across six locations.

Midas Group – one of the UK’s largest independent construction and property services providers -began work on the site for Dowlas Developments in May 2012. The 44 week build finished several weeks ahead of schedule.

The new development is a key element in a strategic review for Knightstone called ‘Take on the Future.’ The aim of the review is to refocus its operational area, reshape its services and refresh its ways of working. The move to the new office also supports Knightstone’s goals to align its services in a more concentrated geographic area, covering nine local authorities in the West of England and Somerset.

“Investing in the new office highlights our commitment to North Somerset, it is a fantastic place to do business and invest in. We initially looked for existing offices but nothing matched our strict criteria. We decided to build a space that had multiple transport options for staff, a high-tech working environment, and made a statement about our confidence in the future of the business.

“We are delighted with the performance of Midas on this contract. They have a culture of excellence and customer service which I feel is exemplified in this superb high quality building.”

“This was a major scheme for the region and significant nationally in the current market so we were delighted to be part of it. We’ve worked in true partnership with our client, Dowlas, and delivered an exceptional new headquarters for Knightstone that we’re very proud of.” 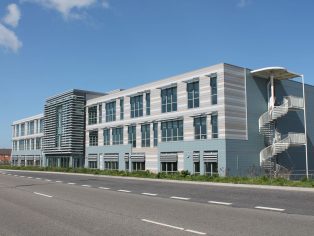