Eight years since its inception, Clerkenwell Design Week (CDW) has transformed from a small design festival into a sprawling fair of design education, installation, entertainment and a showcase of new and classic furniture, lighting and accessories.

The sad loss of the Farmiloe Building as the heart of the festival was quickly forgotten as EC1’s legendary Fabric nightclub opened its doors to design and interiors patrons. And the new layout of CDW brought a sense of excitement among the local design community, ultimately drawing in over 30,000 visitors.

An array of design led installations sprouted up over the three-day festival. St John’s Square was treated to a classic Airstream caravan by fabric specialists Ultrafabrics, the Museum of Making and by Acrylicize & Bisley’s spectacular water fountain made of metal filing cabinets.
A short walk from the square was The Future of Design Pavilion located in the gardens of St James’ Church where the timber temple HakFolly was tucked under St John’s Gate while colourful waves of ceramic tiles pointed visitors to their next CDW stops.

An imperative element of any design festival is to generate discussion and debate within the community, helping to drive forward standards, behaviours and design itself. Thought-provoking series of talks were held by the organisers and many of the participating showrooms.

Subjects included Location vs Architecture, where it was discussed which of the two is more important in a new commercial space. Another seminar included a guide from ACID (Anti Copying In Design) as to how designers can protect their work, plus a fascinating talk by the architects, designers and the Deputy Director of the Design Museum discussing how the museum moved into the Commonwealth Institute building in Kensington.

A distinguishing feature of Clerkenwell Design Week has always been the activities laid out by manufacturers, makers, architects, designers and dealerships. The Museum of Making housed a series of makers, including Goldsmith’s from the Goldsmiths Centre who guided visitors through tapping out designs on copper pendants, keepsakes created through the use of tiny hammers and engraving tools. At the USM showroom a 3D printer whirred away throughout the festival, teasing out a mysterious object – later discovered to be a vase.

Hassell & Hag created a multisensory experience, luring visitors through a series of dark spaces and providing them with a glimpse of the outside world through smells, textures and sounds. And British Ceramic Tiles helped their patrons design a personalised ceramic tile to take away with them.

Clerkenwell Design Week has developed form a local celebration of creativity to a fully-fledged theme park for the global design community to get involved with and explore.

And with the official venues Project, Additions, Detail, Platform and Design Fields boasting as many new attendees to the festival as seasoned, CDW is showing no signs of slowing down in 2017. 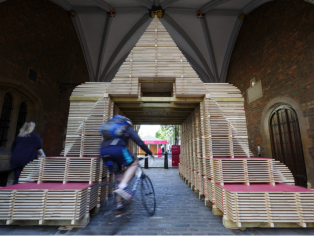 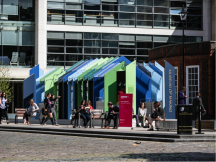