Clerkenwell DesignWeek 2014 is delighted to announce that 32,300 visitors attended the annual festival over three days last month (20-22 May). Led by new Show Director William Knight, the event also marked the festival’s fifth edition, as well as the launch of its new show, Additions, taking over the Crypt on the Green at St James Church.

In addition to the exhibitions, Clerkenewell Design Week showcased an array of specially commissioned projects, street spectacles and pop-up workshops, as part of its CDW Presents and Fringe series; from the Jaguar UK and Foscarini show-stopping installation at Design Factory, to the Smith pavilion by Studio Weave and Tile Mile by russ + henshaw. Meanwhile, the festival’s food and drink partners also continued to make Clerkenwell as much of a gastronomic destination as it is a design one.

The festival would not have been complete without its ever-popular talks programme, Conversations at Clerkenwell. Staged on the third floor of Design Factory, 2014’s talks programme aimed to address some of the key issues for London’s architecture and design industry, with talks and insights from leading architects and designers including Ron Arad, Arik Levy, The Campana Brothers, Sir Peter Cook, Sir Kenneth Grange, Ben van Berkel of UNStudio, Russ Hamilton of Farrells, Chris Wilkinson of Wilkinson Eyre Architects, Amy Hunting of Hunting and Narud and Amanda Baillieu of archiboo.

“Clerkenwell Design Week is always known for its energy and community spirit, where designers, architects and creative minds alike from all over the world gather to celebrate innovative design and creativity.

“Overall, we’re absolutely delighted with this year’s turnout, the highest number of attendance since we launched the festival in 2010. We have had overwhelming responses from everyone including sponsors, showroom partners, exhibitors, collaborators and visitors. We believe that this year’s festival has once again proven Clerkenwell’s position as an international design district, and a true melting pot for creative talent.

“We’re very pleased to reach our fifth anniversary this year and launch our new show Additions. We had an increased number of showroom partners and exhibitors, a range of thought-provoking installations and activities to get the visitors involved, and our star-studded talks programme. Clerkenwell Design Week 2014 was areal success and we look forward to bringing this exciting festival to Clerkenwell again in 2015.”

“CDW2014 has been incredibly successful for Arper. We had a tremendous response to our showroom events with an amazingly well-assorted international crowd. I believe that CDW has become not only the most remarkable design event in London, but also one of the most appreciated appointments on the global agenda for both industry and visitors.”

“This year’s high quality of content and quality brought a non-stop stream of attendees to the area during the festival and to the Vitra showroom, with a continuous buzz of activity and connectivity. Congratulations to the CDW2014 team for a hugely successful show.”

“This year’s CDW was probably one of the most successful ever for Desso. Over the three days, we welcomed over 800 people to the showroom – both customers and visitors. As in previous years, we put together a packed schedule of activity, presentations and workshops, which included the UK launch of Desso’s Light Transmissive Carpet. Another great CDW – here’s to next year’s.”

“For us, CDW is now our preferred show to launch new products because of its focus and clarity of purpose. The festival remains a boutique event, but the quality of visitors and exhibitors is consistently high and so it can have more of an impact than those bigger jamborees.”

“I chose Clerkenwell Design Week for my London debut as it probably is the best professional event in terms of balance between business and show. Its success might be rooted in the uniqueness of this wonderful neighbourhood of furniture showrooms, architectural offices and great places to eat and drink. It is not only good for my business to show at Clerkenwell Design Week, but for me it is also about having a great time being there.”

“Having visited Clerkenwell Design Week over the past two years, I felt as though this year has been the most successful, mainly in terms of the buzz that was brought to the ever so historic part of the city. Additions, which is where I exhibited my Tunisia Made collection, was a really interesting space, with a beautifully curated, eclectic mix of small furnishings and homewares.”

“Clerkenwell Design Week was essential for a new brand like ours, and helped expose us to the wider world, through press mentions before the event itself and a TV interview on day two. We got to meet a host of people: potential collaborators in product design, interesting bloggers and curious everyday folk. Wonderfully inspiring, and in a delightful venue.” 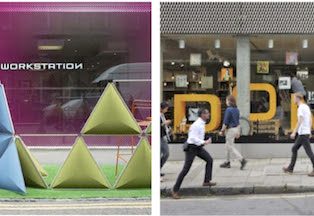