M&G Real Estate were revealed as the overall winners of the prestigious CIBSE Building Performance Awards presented by the Chartered Institution of Building Services Engineers (CIBSE) on Tuesday 10th February 2015 at the Grosvenor House Hotel, London.

Guests saw M&G Real Estate being awarded the overall accolade of ‘Carbon Champion’ for its long-term commitment to improving building performance driven by responsible investment strategy. M&G, one of the top-25 global real estate fund managers, also took home the Energy Management Award for its industry leading long term programme of energy performance improvements to its shopping centre portfolio. The judges were especially impressed by M&G Real Estate showing the way in a competitive market and its effective collaboration with different stakeholders.

“Winning this award was beyond our dreams; through collaboration and partnerships we have been able to develop energy assessment and reporting methodology for industry-wide use. Training and education is of vital importance when trying to reduce energy consumption, and we made sure we engaged all the building’s users and occupiers to help us achieve our goal.”

M&G Real Estate is following in the footsteps of last year’s winner Marks and Spencer for the retailer’s Cheshire Oak store, demonstrating the continued effort and dedication of the retail sector to reduce energy consumption and carbon emissions through lasting improvements in energy management. These range from improved monitoring and measuring systems to refurbishments with short term pay-back and also longer term changes requiring greater investment, such as a commitment to improved cooling technology and systems.

Having flown in from Australia to welcome guests at the Awards, CIBSE President, Peter Kinsella, thanked and commended all of this year’s Building Performance Award entrants and winners for their contributions to delivering better building performance.

Let there be light- One category, two winners

The new Lighting for Building Performance Award was launched, attracting a range of exciting high quality lighting projects. The entries all demonstrated a holistic approach to improving building performance, including improvement over existing systems, energy efficiency, carbon saving, and proven occupant satisfaction. Due to the high quality of entries, the judges were not able to pick one winner only and decided that Cundall Birmingham and Sainsbury’s Project Graphite were both deserving of the award.

Cundall Light4 created an occupant focused lighting design solution for Cundall Birmingham’s office that, according to judges “breaks the general mould and is a significant achievement to make it work in a landlord-owned building”.

The LED lighting programme, Sainsbury’s Project Graphite, by Sainsbury’s Supermarkets was described by the judges as “a strong, clever understanding of design intent.” They were particularly impressed to see a retail environment leading the way in sustainable lighting.

John Aston, President of the Society of Light and Lighting, said:

“I am delighted that CIBSE has chosen to mark the International Year of Light 2015 by launching the Lighting for Building Performance Award, and the joint winners demonstrated just what good design and the latest technology can achieve. I look forward to seeing an ever wider range of high quality entries to build on the achievements of Sainsbury’s and Cundall tonight”.

The International Project of the Year was recognised for the second year and saw four very different projects shortlisted in Australia, the US and New Zealand. The winner was Beca for its artesian heating and cooling system installed at Christchurch International Airport. In the light of the 2011 earthquake which severely damaged New Zealand’s second largest city, this project is a testament of a now greener city on its road to a full recovery four years on.

The winning entries for the CIBSE 2015 Building Performance Awards were:

Building Services Consultancy of the Year (over 100 employees)
AECOM 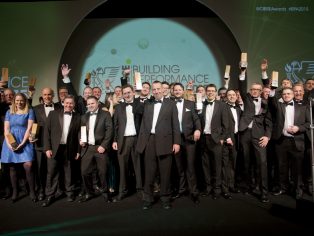 Winners of the 2015 Building Performance Awards celebrate their achievements.