Checking out at the library

The new library at the University of Birmingham is wrapped in cladding that offers an interesting new variation on granite in four different finishes. Brian Newell of Shackerley looks at the aesthetics and function.

The University of Birmingham’s landmark Edgbaston campus holds one of the most distinctive pieces of architecture in the city – the historic Aston Webb Building. With its great curved facade, it frames the landscaped Chancellor’s Court, home to the iconic clock tower ‘Old Joe’ which was named after the university’s first chancellor Joseph Chamberlin.

The university’s estate is currently undergoing the biggest campus regeneration since the first phase of the Edgbaston campus was completed over a century ago. The development programme, worth close to £500m, is set to include various teaching facilities, residences and sports facilities that will be delivered over the next five years. However, a centrepiece new library has already been unveiled following 10 years in the planning.

Adjacent to its former 1950s incarnation which will be demolished, the £44m library is a landmark scheme that will be at the heart of the new ‘Green Heart’ landscaped parkland. Due to its specific location, the library’s architects, Associated Architects, had to address the practical demands of the building – such as layout, IT networks and provision for 40 miles of shelving – but also design a scheme that will sit comfortably within the existing architectural context and the new parkland surrounding the new building.

Use of ceramic granite cladding alongside curtain walling and anodised aluminium fins has been instrumental in creating a statement building that answers those aesthetic demands while also offering a robust and sustainable facade.

The architects were asked to come up with a concept for a building that was “of its time, confident and expressive.”  The response from the design team at Associated Architects was to design a contemporary structure that referenced the geometry of its predecessor. Extensive glazing maximises the views and provides a reflective surface, while natural texture and patina of ceramic granite create visual contrast with colour and texture that is juxtaposed against the sheen of the anodised aluminium fins.

Used for the stair core areas and the rear of the tower to differentiate these sections of the building, the ceramic granite helps to break up the facade while providing a solid contrast to the lighter areas.

To achieve this eye-catching effect, the architects specified SureClad ceramic granite in four different finishes including black panels in both highly polished and natural finishes, unpolished grey panels and unpolished panels with a marbled/variegated black and grey finish. This combination creates dark areas on the facade and adds a tonal variation when approaching the edifice.

The contribution of the ceramic granite cladding system was not only aesthetic; its ventilation offers breathable protection for the building fabric and low maintenance durability to boost the structure’s green credentials and service life expectancy.

The large format 1198 x 598 mm ceramic granite panels used are thinner and lighter, yet stronger than traditional cladding materials, thus minimising loadings on the substructure and the building. The design team arranged the panels in a ‘best-fit’ configuration, setting out the ceramic granite in alignment with the windows and floor-to-floor heights to maximise impact and cut waste.

Ceramic granite contributed to the building’s BREEAM ‘Excellent’ rating for materials.  It also contributed to the EPC A rating that was achieved from the Part L model in a building designed to achieve a 50 per cent reduction in energy consumption compared to its predecessor.

The cladding system was fixed to the concrete cores around the fire escapes, creating a 350 mm cavity off the facade that was used to ‘super-insulate’ the building. The interface of the primary support brackets with the concrete structure was thermally broken to prevent cold bridging, further enhancing the cladding’s contribution to the building’s thermal performance.

At the same time, the cladding’s ventilation and impermeability features allow continuous airflow between the outer facade and the internal envelope, preventing moisture build-up and the risk of interstitial condensation.

Fully vitrified, with virtually zero porosity, ceramic granite panels are designed to be unaffected by climatic extremes and conform to international standards for freeze thaw resistance. They are developed to resist algae growth and are also resistant to acids, alkalis and airborne pollution so avoiding staining or discolouration over time. They are also designed to not fade or degrade in UV light. These factors all combine to provide a durable, long lasting, low-maintenance solution that will retain its looks for decades.

Each ceramic granite panel was supplied fully-prefabricated with fixings securely anchored to the rear of each panel ready for installation on site. The patented design of the facade system allows individual panels to be removed and replaced for maintenance purposes if required in the future, without disturbing the rest of the facade.

The University of Birmingham’s estate development programme will expand and update the Edgbaston campus creating an environment that combines new buildings with academic heritage to meet changing student and research requirements.  The use of a ceramic granite ventilated cladding system mirrors this combination of traditional and contemporary, with an update on the inherent properties of granite for the 21st century built environment. 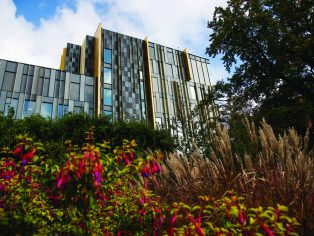