Ian Sutherland from Benchmark by Kingspan discusses how the use of corten steel can create a facade that will change over time to provide visual interest for years to come.

Controlling the interaction between the natural world and the built environment is one of the most fundamental concerns for designers
and architects. In most cases, this simply means ensuring the elements are kept out. Building facades, however, present an opportunity for much greater interplay and experimentation. Through the use of corten steel, architects are increasingly harnessing the weathering process, creating vibrant canvasses which naturally change over time.

Corten, or weathering steel, derives its unique character from a carefully balanced composition – incorporating low alloy elements, such as copper and nickel, during the smelting process. As with all steel, when exposed to the natural elements the surface of corten metal oxidises and forms a patina giving the sheets a distinctive “rusted” look.

The oxide layer is porous, causing it to retain moisture. In standard steel products, this will inevitably lead to further corrosion over time. The alloys within corten steel, however, help to form secondary layers which are resistant to water ingress and help to limit further corrosion of the metal. As a result, it can be used in outdoor applications without the need for a protective paint layer.

Much like the changes the autumn leaves are currently undergoing, when the patina first forms it takes on a yellow shade. If the corten is left uncoated,
this colour will gradually shift to a vibrant orange before settling to a dark red after several years of exposure. The speed of the colour transition is dependent on the frequency of wet and dry cycles the steel undergoes.

The American Society for Testing and Materials first began conducting tests to clarify the benefits of incorporating a low percentage of copper and phosphorous into steel in 1916. Building on this research, United States Steel began testing its own steel and alloy composites in 1929 and in 1933 it patented Cor-Ten A (subsequently joined by Cor-Ten B).

Corten products took their name from an abbreviation of two of their main properties – corrosion resistance and tensile strength. These benefits, in addition to their relatively cheap pricing, originally saw the materials used in a variety of industrial applications such as rail carts in collieries.

Eero Saarinen is often credited as the first designer to make use of weathered steel within an architectural context. In shaping the headquarters for John Deere, an Illinois based farming equipment manufacturer, Saarinen wanted to create a building which reflected the rugged, honest nature of the men who’d formed the company.

His solution was a modernist design, blending glass with a corten steel frame which would develop a “deep hue, similar to that of the oak trees” which surrounded it.

Since then, corten steel has been used in an increasingly wide variety of applications, from shipping containers and bridges to garden furniture and iconic sculptural pieces such as the Antony Gormley’s Angel of the North. The material can be incorporated within a structure in a number of ways, but one of the simplest and most popular remains its use as a rainscreen facade.

Corten rainscreen facades are available in a wide range of sizes and styles. Corten steel is non-combustible and has excellent tensile strength – allowing them to be fitted in long lengths. The panels work particularly well with secret fixings which maintain a clean aesthetic and maximise their visual impact.

When specifying corten facades it is important to consider the potential downside of this unusual medium.

Run-off can cause staining on surrounding materials, so careful planning of guttering and drainage channels is vital. Powder coated cladding can also be used to recreate the look and feel of the material where use of actual corten proves challenging – for example, in sub-tropical environments or for low-level applications where clothing could be marked.

Stand out from the crowd

Corten-clad buildings have a high visual impact that evolves and then settles into the landscape. Perhaps one of the most iconic examples in the UK is the award-winning Broadcasting Tower in Leeds, which won the 2010 Best Tall Building in the World award by the Council on Tall Buildings

The colourful, industrial appearance can also be used to great effect in refurbishment or extension applications. For example, at Kennington Park in London, architects Carey Jones utilised corten rainscreen facades as part of the refurbishment, conversion and extension of a Victorian warehouse.

The cladding was installed as part of a new, four storey entrance unit to Chester House, which now offers Grade-A office space. The material reflects the building’s rich industrial heritage while, through its appearance and modern design, simultaneously providing a clear visual reference point to draw visitors from the forecourt into the main entrance area.

Corten structures always promote a good deal of debate, both in architectural circles and among the general public. As with any distinctive facade material, corten specifications require considerable thought and planning, however, as a growing number of projects have shown, when used well it can deliver truly iconic buildings which will continue to change and surprise over time. 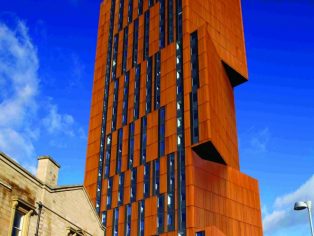 AUTUMN HUES If the corten is left uncoated, its colour will gradually shift to a vibrant orange before settling to a dark red