A topping-out ceremony was held on Thursday at a new 100% affordable block that will become council homes at council rents for 90 Croydon families when it is completed.

Next spring, local people on the borough’s housing waiting list will move into the new town centre apartments being built as part of the 513-home regeneration of the old Taberner House council offices and Queen’s Gardens being built by developer HUB.

The new council homes are part of the Queens Quarter development and are in one of four residential blocks ranging from 13-35 storeys being built on the site.

The overall development site will provide 513 homes, of which at least 51% will be affordable either at council rents, through shared ownership or with rents set at 80% of the market rate under the London Living Rent incentive launched by the Mayor of London. Once the development is completed, the 90 council homes will receive £100,000 per unit – or £9m in total – in funding from the Greater London Authority’s Building Council Homes for Londoners initiative.

The scheme will also include retail units, commercial space and major improvements to the gardens, including landscaping and a café.

Thursday’s ceremony saw councillors, officers and representatives from HUB and contractors take part in a topping-out ceremony to mark the outer structure being finished and visit a show flat at the council-owned block, which will be named Malcolm Wicks House after the late MP for Croydon North.

Upon completion in 2021, Legal & General will take ownership of the second block, a 35-storey building with 251 one, two and three-bedroom apartments for sale. This will also have a rooftop garden, communal facilities on the ground and first floors and a ground-floor commercial unit.

London and Quadrant will take the remaining two blocks with 84 and 88 units respectively as a mix of shared ownership and London Living Rent apartments.

Councillor Alison Butler, Croydon Council’s deputy leader and cabinet member for homes and Gateway services, said: “Providing more genuinely affordable housing for people in need is one of our top priorities, and this excellent development will achieve that by delivering great council homes at council rents for dozens of local families.

“With its upgrade to The Queen’s Gardens and new job creation opportunities, this regeneration scheme promises to be a real boost for Croydon residents and the town centre.”

Damien Sharkey, Managing Director of HUB, said: “We have worked closely with Henry Construction, Bridges Fund Management, and Croydon Council to design and deliver Queens Quarter, a hugely important development not just for its future residents, but for the people of Croydon.

“At HUB, we strongly believe that developers working hand-in-hand with local people produces the best results, and this development demonstrates this, with the delivery of high-quality, affordable homes, and outstanding public realm with the new Queen’s Gardens. We very much look forward to completing the project in 2021.”

The site was home to council headquarters Taberner House from 1967 until 2013, when employees moved into the adjacent Bernard Weatherill House and the site was earmarked for regeneration. Taberner House was demolished in 2015, planning permission was granted for the scheme in 2017, and work started a year later. 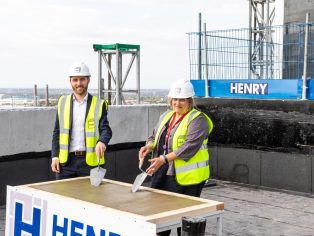