The British Film Institute (BFI) has completed the redevelopment and refurbishment of its central London headquarters on Stephen Street.

Designed by Ben Adams Architects (BAA), the BFI is providing a welcoming new facility for the film industry in the heart of the West End.

Following the relocation of the BFI Reuben Library to its South Bank venue, the BFI has refurbished the screening rooms and rethought the vacated spaces to host a range of functions, including industry launches, meetings for partners from across the UK coming to London and educational workshops.

The completed works have reinvigorated the existing 1950s building, including a complete overhaul of the ground floor space and reconnecting the offices to the street. BAA has worked closely with Softroom Architects, who are responsible for a new Benugo’s restaurant also on the ground floor. Known as the Stephen Street Kitchen, this new eatery will further enliven the relationship between the building and the streetscape while seamlessly ‘bleeding’ into the open-plan reception area.

A new canopy has been purpose-built at the entrance, while at the rear of the building a new planted, terrace space has been installed to create a social space in a previously neglected part of the site. Also covered by a canopy, this area can be enjoyed throughout the year. Inside the office building, the reception and waiting area has been redesigned and spaces have been opened out to accommodate new events and activities, as well as accessible meeting places. This area has now been better connected to the basement level, creating a light-filled entrance to the lower level screening rooms.

“The key space created by the new build is the well-designed restaurant and terrace areas, which are open to the film industry and members of the public alike. The deals done and cultural discussions about film that take place in these spaces could help set the course for the British film industry in the coming decade.”

Founded in 1933, the new BFI headquarters underlines the growth of the organisation’s activities in supporting the film industry and creating more opportunities for people to enjoy and engage with film. 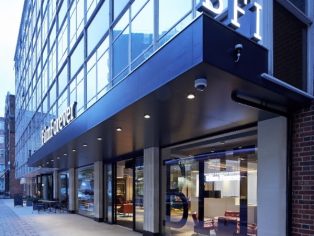