Cwmavon-based Capital Valley Plastics is pleased to announce its success at the Monmouthshire Business Awards 2017. The independent manufacturer and supplier of polythene film won the Excellence in Innovation award and was a finalist in the Excellence in Manufacturing category.

The winners of the 2017 Monmouthshire Business Awards were announced during a gala dinner and presentation night at the Celtic Manor Resort in Newport, hosted by broadcaster, Hywel James.

Now in its seventh year, the awards provide local businesses with a prestigious platform to showcase excellence. The successful awards 2017 saw entries increase threefold, with the county boundary extended to cover the towns and cities of ‘old Monmouthshire’.

“We feel incredibly proud of our award win and nomination. We were one of three Torfaen businesses to receive awards and it is a privilege to be a part of such a thriving region.”

Established in 1987, Capital Valley Plastics is one of the market leaders in the polythene film industry. In the year 2000 Capital Valley Plastics established the Radbar brand of gas barriers, producing radon, methane and carbon dioxide membranes.  In 2017, the Radbar Flexible Hydrocarbon Membrane became the first hydrocarbon membrane to be certified by the British Board of Agrément.  The membrane prevents the ingress of hydrocarbons and VOC’s, such as petrol and diesel.  This allows contaminated sites such as former petrol stations and industrial yards to be redeveloped without putting the building or future occupants at risk.

For more information on Capital Valley Plastics and its products please visit www.capitalvalleyplastics.com or contact 01495 772255. 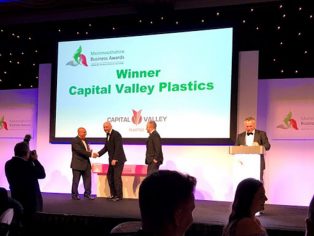