A major house builder has revealed exciting conceptual plans for around 450 – 500 much needed homes as part of a wider residential led development proposal on a former industrial dockland site in Leith.

The development would see the regeneration of what is currently a vacant brownfield site while providing a substantial economic boost to the local area, as well as further contribution to encourage the expansion of the Edinburgh trams project.

The company, which has its national headquarters in Edinburgh, has submitted a Proposal of Application Notice to The City of Edinburgh Council relating to an application for Full Planning Permission, and is planning a Public Consultation Event in April.

Local ward councillors as well as the Leith Harbour and Newhaven Community Council have also been informed, and CALA are very keen to understand the views and opinions of the local community and key stakeholders early in the design evolution process.

Dennis Jones, Centre Manager at Ocean Terminal welcomes the residential led proposal which he believes would support the Shopping Centre through the regeneration of the immediate surrounding area.

“The proposed development will have a positive effect for the local region and will directly support jobs, not just in Ocean Terminal, but in the wider local area.

“Leith is an area full of character and a development of this nature will add to the continued regeneration, making it one of the most vibrant parts of the country to live, work and visit.”

The proposed plans for Waterfront Plaza would see the development of one to three bedroom apartments, townhouses and colonies to include 25% on site provision of affordable homes.

Commenting on the development, Stuart Paterson, Chief Financial Officer at Forth Ports, said:
“Forth Ports welcomes CALA’s housing development plans for Waterfront Plaza. The area of land is not currently used to the maximum benefit of the local Leith community and we are keen to ensure that this is changed. This is great news for the local area and will help address Edinburgh’s current housing shortage and support the Ocean Terminal retail development.”

Craig Lynes, Land Director with CALA Homes (East), believes there is a significant demand for much need housing in the local area.

“Leith has been transformed over the past 30 years, however progress has slowed. The recently completed nearby Albert Dock development located off Ocean Drive which included townhouses and apartments was a great success. It is clear there is a demand for a range of high quality properties to include apartments and family homes in the area.”

“Our proposals for Waterfront Plaza are centred around a pedestrianised high quality Public Realm through the development linking the Shore area to Ocean Terminal. The plans will positively regenerate the area and relate to the proposed Tram Route along Ocean Drive whilst addressing a strong and unmet demand for high quality new housing in Leith.

“We would like to develop a range and choice of homes on the site, to include apartments, colonies and family homes including the delivery of much needed affordable housing.

“Of course, we are at the early stages of the process and are very keen to engage with the local community, businesses and key stakeholders to help shape our proposals.”

Following a period of Public Consultation and Stakeholder engagement in the coming months, the firm plan to lodge a Detailed Planning Application in the summer. With a positive planning decision towards the end of the year, work on site could start in the early part of 2017. 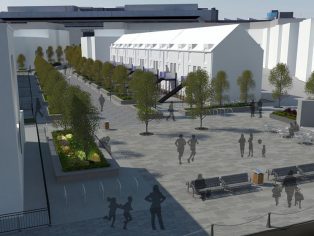