Work has started on an innovative new affordable housing development, which is the first of its kind in East Lothian, with a rallying call for local businesses to grab themselves a role.

Luxury house builder CALA Homes recently revealed it would be creating 12 stunning properties in one of Scotland’s most sought after coastal locations, with the homes being offered at significantly discounted price to people on the council housing waiting list.

Now the contract manager who is overseeing the project at Gilsland Grange in North Berwick has also revealed how the build out is also creating a host of possible work opportunities for local contractors, with one North Berwick based Electrician already enjoying a major involvement in the project.

Brian Cawley, 56, who has worked with CALA Homes for 12 years, said:

“We try to employ as many local trades as possible on our sites, and this site will be no different.

“We want to make sure local employers are involved, so we are encouraging contractors based in and around North Berwick and elsewhere in East Lothian to contact us.

“At the very least it is a chance for them to find out what CALA Homes is all about and how we work and share our commitment to quality and to health and safety.

“For those who are the right fit and who are ambitious, this is a chance to work on this innovative project and to put themselves in the frame for future work with CALA Homes on other developments in East Lothian.”

Early work which has started on the site will include the initial earthworks and placing the compound and welfare facility, including office, canteen, toilets, drying room and other facilities for staff on site.

The sub structure, including drainage and laying of foundations, will take shape over the next three months. The main construction work is due to start in January when the timber frames will be put in place, marking the best point for local contractors to get involved. The homes will be ready for occupation in the summer of next year.

One local contractor already benefitting from working on the site is Gary Higgins of Lothian Electrical and Data Solutions.

“I’ve been working with CALA on the North Berwick sites since they began in 2013.

“Getting this kind of work from a firm like CALA is obviously fantastic and it’s great to see they are so committed to supporting local firms.

“From a more personal point of view I’m extremely passionate about East Lothian and the town itself, so it is an added bonus that I’m helping to provide affordable houses for local people on the council waiting list.”

Last month (OCT), CALA Homes announced it would be delivering a selection of affordable homes to be sold for up to 43 per cent below market value – meaning savings of up to £85,000. The move will help deliver much needed family homes and help first time buyers.

The move is the first of its type after East Lothian Council announced in January its intention to work with housing developers to offer discounted properties, predominantly to first time buyers on modest incomes.

CALA’s Discounted Home Ownership scheme adds to what is already available in the affordable homes spectrum, offering greater variety than the usual social renting option. The percentage difference between the discounted price of a property and its market value would be secured by a standard security in favour of East Lothian Council.

Successful applicants who later want to sell the property would have to do so with a resale value at the same percentage discount – and if no buyer can be found the council would get first refusal to buy the property.

People currently on East Lothian Council’s housing waiting list will be eligible to apply for the scheme, as long as they can secure a mortgage for the discounted properties, which will be sold on a fixed price basis. Applicants who meet all the criteria will be selected by CALA Homes and approved by East Lothian Council. 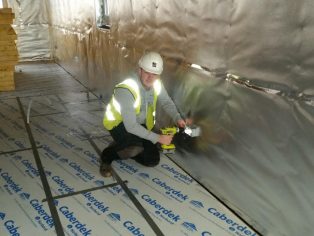