Bungalows are in short supply, accounting for less than 2% of homes in England, but in Pershore Redrow is doing its level best to boost numbers.

Only 300 bungalows were built in England in 2009 – the most recent figures on record – and currently only two per cent of English homes are bungalows.

Redrow is bucking the trend by including a number of bungalows at its Abbey Meadows development in Pershore.

“The fact that the latest statistics on the number of bungalows being built date back five years is evidence of just how rare they are. We may only have a small number at our Abbey Meadows development in Pershore but they’re perfect for downsizers and those who are looking for a more manageable home set out over one floor.”

Offering 1,028 sq ft of accommodation, the Fairford at Abbey Meadows is a sizable bungalow with carefully planned two-bedroom accommodation.

It features a spacious lounge of almost 200 sq ft, plus an open plan kitchen and dining room with patio doors on to the garden. There’s also a study, providing a quiet space to work or read. The generous master bedroom has its own en-suite shower room to complement the main bathroom; while the good sized second bedroom is perfect for guests. Priced from £359,995, the Fairford also benefits from an integral garage and wide driveway.

Along with the bungalows, Abbey Meadows also features a good choice of two, three, four and five-bedroom houses, with current prices from £342,995 for a three-bedroom Leamington.

The development enjoys a quiet picturesque setting overlooking a farm, yet there are plenty of amenities within easy reach as the town centre is only a 15 minute walk away. The surrounding area is well served by schools for all ages, making this an ideal home for buyers with children; while easy access to the M5 & M50 means it’s sure to appeal to commuters.

To find out more about the homes available visit the sales office and showhome, open Thursday to Monday from 10am to 5.30pm. For more information see www.redrow.co.uk/abbey or by call 01386 244403. 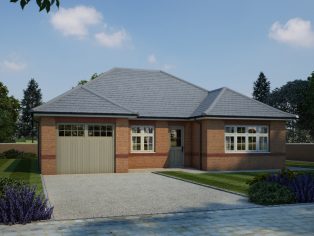 A CGI of a Fairford style bungalow at Abbey Meadows, Pershore.