The award-winning Lancaster Cohousing project on the banks of the River Lune is fast becoming an inspiration for sustainable low-cost communities of the future, as Heather Dixon reports.

It took four friends with a vision, a huge leap of faith and years of weekly meetings to turn an ambitious dream of living together in a community into award-winning reality.

Yet the founding group of the Lancaster Cohousing project not only achieved their goal of creating a sustainable, low-cost living environment, but they exceeded all expectations.

The 41-house community on the banks of the beautiful River Lune is the only self-build scheme of its kind in the country to achieve sustainable homes level 6 and certified Passivhaus accreditation.

It’s an extraordinary achievement for a group of unassuming people who simply wanted a better quality of life.

When they first got together nearly 10 years ago, their common dream was to build a community of sustainable housing which would be built by the people, for the people, for the cost of similar sized homes on a developer-led housing estate. The properties would be eco-friendly in every sense of the word, their running costs would be minimal and the community spirit would be reminiscent of a bygone era within a modern setting.

It was a huge gamble. The founding members were prepared to sell their homes to buy a plot of industrial brownfield land without planning permission, in order to pursue their beliefs in a bright new future. They were prepared to live in rented accommodation, share housing or even – in one case – set up camp in an old office as the project evolved.

Mark Westcombe was one of those people. He said:

“We were all members of the Green Party and thought it would be a good idea to live together, and we started thinking about how we would live together and came across the idea of co-housing.”

They met regularly in a local pub to discuss their ideas and were soon joined by like-minded people from all over the UK who were willing to invest their time and energy in a scheme which would not only deliver a particular lifestyle, but also become a role model for all future cohousing developments.

One of the early members, Pete, said:

“I joined the forming community several years back and participated in the group’s process as we made decisions and choices about the eventual design and layout of the project. We use a consensus process, which takes time, and we needed a lot of patience and commitment before even a brick was laid. I initially found myself involved because, sitting with friends by a campfire late one night, I idly mused ‘why don’t we live like this all year round? We could look after each other’s children, and all eat together, we would have a hundred bikes and just one car, solar panels on the roof and compost toilets.’ Someone told me that I had just described Lancaster Cohousing, as the group was then known. Within three weeks I was fully signed up.”

Andrew Yeats from Eco Arc Architects was invited to come on board from the early stages and he quickly saw the potential energy-efficient benefits of the proposed 2.5 hectare site on the banks of the river, with its 45 degree, south facing slope. Andrew said:

“It developed from a unique combination of circumstances.”

“It would cost £1 million just for the rendition work on the contaminated industrial site. Yet the fact that so many people were working together, designing the houses collectively, with all the accounts open and transparent, meant that they could keep the costs as low as possible.”

For couples like Elizabeth and Luke Mills, the project offered the kind of lifestyle they had been dreaming of for years.

“We were tired of long commutes to work and living in an isolated house.”

“We wanted to live in a community in a sustainable environment. These days there are very few old-style communities left in which everyone knows each other and looks out for each other. This project was recreating something from the past and taking it into the future.”

The Forge Bank site near the village of Halton, within cycling distance of town, was an ideal location for zero-carbon homes with its orientation and sloping land. Meetings were held regularly as the concept gathered momentum and in 2011, five years after that initial seed was sown, work began on the building of 41 one-, two- and three-bedroom homes, ranging between 40 sq m and 98 sq m in size. The development includes a flexible community centre where residents can cook, eat and socialise together; a general food store, laundry and children’s playroom, plus a vibrant business environment in a renovated mill where small businesses, social enterprises and community-based organisations can flourish.

The houses are timber framed with wide cavity masonry and feature photovoltaic panels, solar panels and a centralised biomass boiler which provides one pocket-sized radiator for each house – all that is needed to keep them warm and cosy throughout the harshest of winters. The spec also includes external triple glazed doors and windows, sedum roofs, a designated bin and recycle store and a heat recovery ventilation system. The average construction cost is around £1,825 per sq m.

“Lots of developments now use the term ‘eco’ in their marketing, but Forge Bank actually delivers on the promise through Passivhaus design and green energy generation.”

The Passivhaus standard dramatically reduces the need for space heating and can reduce heating bills by 90 per cent compared with conventional homes. This saving is achieved through south facing aspects, high levels of insulation to eliminate thermal bridging between inner and outer walls, airtightness and mechanical ventilation and heat recovery. The result is negligible heat loss during winter and the temperature of internal surfaces is almost the same as the internal air temperature, providing a very comfortable living environment.

The success of the project has been in the detail, as well as the bigger picture, such as specialised plastering and the use of tape and membranes to reduce air leakage and eliminate draughts.

“After living in a Victorian house for the last 20 years I thought cold draughts were a fact of life, but our new Passivhaus has none. Everyone who walks in asks us if we have our heating on as it feels so warm – we don’t. This is seriously impressive technology we are living in.”

Every last detail is built with sustainability in mind, from the high spec insulation to the provision of hot water from a highly efficient wood chip boiler in the mill building, which is delivered through insulated pipes to each property and supplemented by over 50 sq m of solar thermal collectors.

District heating systems such as these are common in other countries, but still unusual in the UK. In fact the system at the Lancaster Cohousing project is believed to be the first of its kind in the country to combine biomass and solar thermal energy sources.

Forge Bank generates its own electricity via a 160kW hydro-electric scheme (developed in conjunction with Halton community). This is connected to a microgrid and each home has a meter. Power from this scheme, along with power generated by photovoltaic solar panels mounted on the most appropriate roofs, is used in preference to National Grid electricity, which will only be imported when demand exceeds supply.

“The house I live in has exceeded all my expectations with regard to comfort, warmth and air quality. The utility bills are exceptionally low.”

She also welcomes the strong sense of community, which binds the residents together.

In a video link about the project, she said:

“The design of the site encourages interaction so you can’t walk down the street without seeing people you know, because you know all your neighbours. That also encourages the sharing of things, so you’re saving time and money by living here because of sharing all the facilities.”

As well as the sustainable housing, which costs around £228,000 for a flat to £302,000 for a three-bedroom house, the community also operates a car share scheme and organic vegetable deliveries alongside a policy of sharing appliances and garden machinery, such as washing machines and lawnmowers.

“I am particularly proud of the fact that we have delivered 41 passive houses but to the local market value, so there is no premium added onto the houses.”

The scheme has proved so successful that it has already won a raft of awards, including the Murray Armor Award 2013 National Self Build Association; the Observer Magazine Community Energy Award; GAGA Sustainability Award 2014; Passive House Trust UK Housing Award, and was a finalist in the RIBA Sustainable Design Award 2014. It is also the only code for sustainable homes level 6 & Certified passive house self-build scheme in the UK.

The awards, it seems, are well deserved. Luke and Elizabeth’s change of lifestyle has exceeded all their expectations.

“We moved into our house last year and it has been everything we had hoped for.”

“I would like to see more cohousing projects like this one developing throughout the country, and hope that the concept of cohousing will one day become the norm so that more and more people can enjoy the benefits of old-style communities within a modern context.”

The project was supported by a grant as part of an initiative called the Rural Carbon Challenge Fund (RCCF), which was set up to support community-level renewable energy projects across the north west of England. The RCCF is funded by Defra and the European Agricultural Fund for Rural Development. To secure the funding the coordinators needed to demonstrate that the project could be a ‘trailblazer’ that could be replicated elsewhere; offer an element of innovation and uniqueness; benefit rural communities within the North West; offer value for money in terms of carbon savings and energy generation; benefit the rural economy, agricultural and forestry sectors, and be fully operational by October 2013.

A further grant from the Rural Development Programme for England (RDPE), which is funded by the European Agricultural Fund for Rural Development, covered part of the cost of refurbishing Halton Mill.

Grant funding was obtained in partnership with Halton Community Association (HCA). HCA’s share of the funding supported the development of the community-owned hydro-electric project at Forge Weir on the River Lune – directly adjoining the site. 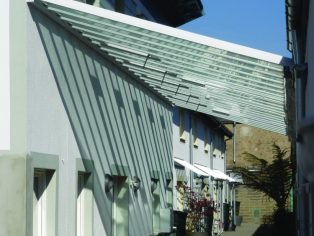