More than a third of home improvers have cancelled or postponed plans to either move or improve due to uncertainty surrounding Brexit over the past two years, according to new research by VELUX.

The research among 2,000 homeowners with plans to carry out home improvements over the next 6 months, reveals that more than a quarter (27%) feel their plans will be impacted by the UK Government’s decision to leave the EU on 31 October, regardless of whether the UK leaves with or without a deal.

The different impacts of Britain’s Brexit outcome on home improvement plans are even more acute when comparing different cities and demographics.

For one in six (18%) home improving households in London and Edinburgh, a no-deal Brexit would likely result in cancellation or postponement of plans, a higher proportion than in any other key UK cities. The sentiment expressed by homeowners in these two cities towards a no-deal Brexit correlates with concentrations of Remain voters.

Despite the undeniable impact of Brexit on home improvement intentions for a significant minority of homeowners with plans to move or improve, for almost half (49%) it’s simply business as usual, with the outcome of Brexit having no bearing on their plans to improve their homes.

“The spectre of Brexit has clearly played a major factor in many households’ home improvement decisions during recent years and looks set to continue playing a key role in the decision-making process.

“When it comes to making significant investments such as home extensions or loft conversions, it’s no surprise that some homeowners have taken a more cautious approach to improving their homes or even moving home. Concern around house prices and interest rates often impacts consumer spending plans when it comes to decisions around home improvements or moving.

“However, it’s pleasing to see that a large proportion of homeowners remain unaffected by wider uncertainty surrounding Brexit. For many people, the emotional benefits of improving their living spaces outweigh wider economic considerations. For them and their families, creating the ideal living space is paramount to their lifestyle aspirations.”

For more information or inspiration on how to create your dream home, visit www.velux.co.uk 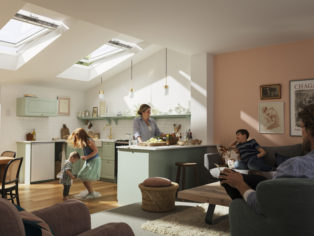