A survey of more than 100 real estate investors across Europe has shown that a huge majority are in favour of certification schemes that recognise building sustainability. Almost two-thirds say their preferred scheme is BREEAM, the standard which is rolled out through a network of European and scheme operators.

The findings of this independent survey by international law firm DLA Piper, have been published in a report called Towards a Greener Future, which was launched last week at MIPM 2014 in Cannes.

The report concluded that market demand from occupiers – rather than issues such as government legislation – is the driving force behind delivering sustainable real estate. Many businesses recognise not only the lower operational costs associated with sustainability, but also the role the sustainable buildings can play in communicating the brand and business ethos.

As sustainability becomes a key issue for occupiers it also impacts on investors, with market demand driving sustainable real estate to become seen as the best investment. Of those responding to the survey, 71% said they would be willing to incur higher investment costs for sustainable real estate. Many identified increases in capital and income, combined with lower operational costs and higher rents, as enabling them to spend more on sustainability.

An overwhelming 88% of respondents consider green certification to be important when developing or investing in new buildings. However there is concern at the number of schemes that have been developed on national lines and then exported. Most investors want a single certification scheme that allows ‘level playing field’ comparisons and benchmarking. Olaf Schmidt, co-head of DLA Piper’s Real Estate practice, said:

“With clients active across Europe, we have witnessed the growth in interest in sustainable real estate across the continent. Our survey confirms that investors – particularly those involved with cross border transactions – would welcome a harmonisation of certification standards to facilitate further take up of sustainable practices and engender transparency of performance standards.”

When asked which of the current certification schemes they preferred, almost two-thirds of respondents said that they favoured BREEAM. Used in many countries throughout Europe – a number of which have their own national BREEAM schemes – and around the world, BREEAM is widely viewed as an international rather than UK-only scheme.

‘The DLA piper report is welcomed by BRE. This independent research, builds on three similar reports from recent years, demonstrating the benefits of BREEAM, the value of its science based approach and the value it brings to buildings and the marketplace.’ 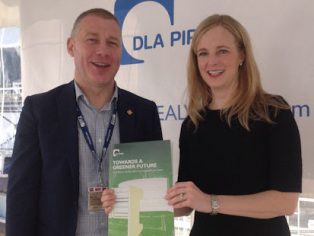 Martin Townsend, a Director of BREEAM, with Christiane Conrads, a DLA Piper Senior Associate, Cologne, at the launch of Towards a Greener Future.