Designed as a ‘city within a city,’ Vendsyssel Theatre in Hjørring, Denmark, is also a new corten-clad cultural landmark where performers and audience members exist in close proximity. Stephen Cousins reports.

Like an actor preparing to get into character before going on stage, there are two very distinct facades to Vendsyssel Theatre in Hjørring, Denmark. Approach the building during the day and you will see elevations clad in a mixture of weathered brown corten steel and frosted glass over pastel hues of green and pink.

Visit at night, and the corten steel disappears entirely from view, consumed by the darkness, while the glass comes vividly to life, illuminated by red and violet LED light.

This dynamic juxtaposition reflects the intent of lead designer Schmidt Hammer Lassen Architects (SHL), to create a building that manifests itself as a “new living organism in the cityscape”, which is subject to constant change, both aesthetically and in use.

It is also a radical response to a once-in-a-lifetime brief to deliver Denmark’s first newly built theatre outside of the capital Copenhagen in over a century, a modern cultural facility that also had to integrate with the local architectural tradition.

“We had to stop and think, what does it mean to design a cultural building like this which is so rare, especially in Denmark. In the past, people tended to express the cultural power of theatre in architecture, today we are in a completely different world, so we had a lot of thoughts on what that might mean. We also had to take into account the fact that Hjørring is a holiday location, in the northern part of the country, and not necessarily associated with theatre and culture.”

The 4,200 m² building is conceived as a “theatre and experience house”, a multifunctional complex with a ground floor concert hall, ‘black box’ theatre, a rehearsal hall, and a 430-seat flexible hall able to switch between an ‘in-the-round’ theatre in the mode of Shakespeare’s Globe in London, and a theatre with a more conventional layout with the stage at the front of the auditorium.

The designers took a pragmatic view of culture as an opportunity and experience for all. Therefore, space has been created for both scheduled and ad hoc events in a plaza at the front of the building, inside the foyer and on a grand staircase, where visitors can choose to be spectators or even participate in activities.

Another design concept is the notion of creating a “city within the city” by dividing the building into a series of separate cubic volumes, connected by generous circulation and meeting areas, similar to the streets and squares of a city.

Actors and staff are able to flow between the different blocks, as easily as blood in an artery. The theatre’s location, between the main train and bus stations and a main shopping area, encourages the general public to pass through from one side to the other, and maybe stop to meet or buy food at the cafe.

Creating a microcosm of a city made practical sense in terms of the building’s internal logistics – exploding the large volume into cubic blocks helped streamline pathways for the complex services for electrics, air conditioning, lighting etc.

“Had we designed the theatre traditionally, as single volume, it would have been very dominant compared to the site and the surrounding buildings. Breaking the form down into cubic blocks allowed us to create a more satisfying composition that blends much better into the cityscape.”

SHL wanted to blur the boundaries between publicly accessible areas and more traditional theatre functions so that spaces interconnect to bring actors and audience members into closer proximity.

It’s possible to visit during the day and see actors and technical staff moving stage sets around, and performers can glimpse the public from their lounge on the top level. All the major halls can be opened to the foyer, while the use of glass and windows in different rooms creates visual connections.

“The client had a very different approach from the traditional split between actors and the audience. We were very inspired by that and tried to open things up to enable the public to see some of the things that go on backstage,” says Kierkegaard.

Increasing levels of transparency enabled more light to enter the building. Glass curtain walls running along the entrance allow large amounts of daylight into the foyer and cafe area, which is topped by a long skylight.

In terms of the theatre’s external appearance, the designers saw the need to dare to be different while maintaining a focus on the city’s existing qualities. The rusty reddish-brown corten steel is an unmistakable contemporary material, yet its natural patina and matt surface closely match materials in surrounding old buildings. The steel will become stronger as the surface oxidises to form a protective layer more resistant to wear and tear.

The illuminated elevations are a modern twist on the bright-coloured signage seen in London’s West End, New York’s Broadway, or the Moulin Rouge in Paris. In contrast, during the day the pastel colours behind the glass mimic those seen on existing plaster and brick facades in the surrounding area.

“We wanted to create a modern expression with its own architectural language, rather than simply imitate the surrounding city; something totally different that would also be recognisable as a theatre, not another typology like housing or an office block,” says Kierkegaard.

The sharp corners where the glass and corten steel come together were particularly tricky to detail.

The metal panels have a very thin profile, but the frosted glass panels are thick and incorporate a void with colour-changing LED lights sandwiched in between.

Several tests and mock ups of the glass facade were required to reduce the size of the bearings to minimise the amount of shadow visible on the coloured walls.

Vendsyssel Theatre is envisaged as a cultural hub, a meeting place of people of all ages, and a place to nurture local youngsters wanting to excel in theatrical art. Hjørring has a strong tradition for theatre, particularly theatrical experimentation and a thriving scene of small amateur theatre clubs.

Each hall employs a different aesthetic and acoustic approach.

“Just as in the city each house has a different attitude and atmosphere,” says Kierkegaard.

The flexible main theatre is all black inside with a shifting pattern of triangular panels on the walls that conceal perforated acoustic absorbers.

During the transformation process from a round theatre with a central stage into a semi-circular theatre with a stage
at one end, sophisticated technical tricks are required to lower a section of seating into the floor then cover it over. According to the architect, designing the theatre to function in both modes was a challenge
in terms of the spatial geometry and configuring the theatrical machinery, sound and lighting equipment for
each mode.

The curved end of this theatre juts into the lobby space and features wooden benches carved into its lower level. In the future it can be used as a screen to project images and films onto.

The music hall’s acoustics are specially customised for classical music and it has a much lighter interior with projecting timber blocks lining the walls. On one side of the hall, the lower part of the wall is open to reveal pink LED lights slotted behind the facade.

SHL’s innovative approach to theatre design, which splices together ideas of the theatre as a living organism and a microcosm of the city, has proved a major hit with the public. Since the theatre opened in January it is already a popular social hub and all shows for the current season have sold out, spurring on actors to experiment even more with their craft. 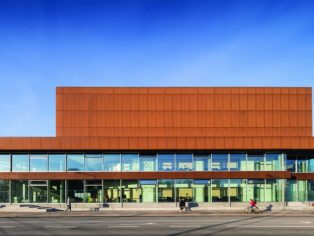 Frosted glass over pastel coloured walls provides a soft contrast with the corten steel by day, but glows at night lit by LEDs 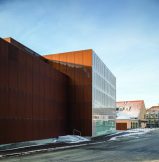