Some 24,000 Welsh slates have topped the challenging £7 million renovation of the oldest part of Bolton Town Hall.

The county-grade 500mm x 300mm Penrhyn Heather Blues from Welsh Slate, part of the Lagan Group, were specified by main contractor Willmott Dixon as they matched the original roof slates.

The reroof of the Grade II listed Albert Hall was just one element of the refurbishment to provide improved restaurant, conference and wedding facilities. Internal work included renovation of the Function Hall and Lancaster Suite and a new café along with new external terraces and fountains and stone repairs.

The project to give the four-storey Albert Hall, which was built in 1873 and extended in the 1930s, a new lease of life was procured through the SCAPE major works framework.

“The Welsh slates were specified as they are the same as the original.”

The Welsh slates were installed over open timber rafters and with double copper nails over six winter months and 1,500m² of various roofs and areas by specialist roofing contractor MAC Roofing who replaced all but the high-level Albert Hall roof slates as these were repairable.

MAC Roofing found the project, to upgrade the roof in terms of installation, challenging on several fronts.

“It was a very tight site which involved a lot of carrying by hand of both new and old materials. We worked to a strict timetable and had to utilise cranes to service the council chambers due to their recessed location in the middle of the complex.”

Due to these challenges, MAC Roofing hand-picked the operatives involved in this project. The installation required a very high level of skill and knowledge to replace and upgrade a very complicated old roof with a 21st Century specification that incorporated a number of modern items.

All materials (both goods and passenger) were raised the four storeys by hoist and dispersed the long distances to the work areas involved. To this end, with very little lay down area provided, all slate deliveries had to be ‘Just in Time’ to allow smooth progress.

In addition, on each elevation of the Town Hall, there was intricate detailing required when it came to slate cutting and lead installation, such as tapered eaves courses, diminishing elevation dimensions and walkway plinths.

And then there was the Peregrine Falcon, a protected species!

MAC had been informed in the early stages of the project of the impending arrival of the bird of prey that nests annually in the clock tower.

“It was made clear to us that if the falcon did arrive works would need to stop in certain areas and this had the potential to significantly affect our works programme.

“The falcon did indeed arrive and nest within a few days of its anticipated arrival. However, despite this unusual complication, a revised plan was discussed and put in place and the overall programme was kept on track without issue. Careful thought out   planning enabled certain areas of work to be switched and completed earlier, allowing all areas directly below the clock tower to be vacated as required.

“Although this project was set against a very stringent time scale, safety standards were never compromised. All operatives wore the full range of PPE at all times. The only exception to this was during the time the falcon was nesting within the clock tower. This resulted in all high viz jackets having to be temporarily removed so as to not distract it!”

MAC Roofing’s work on the Bolton Albert Hall project won it a Welsh Slate Living Heritage award and it was also short-listed in this year’s NFRC National Roofing Awards. 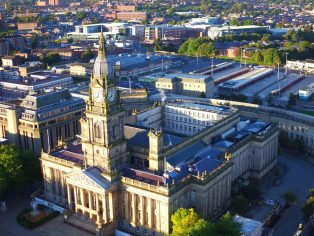