Facing out across the Bristol Channel, the Beach House at Brean, near Weston-Super-Mare, is both striking and robust – and now features a roof guaranteed by BMI Redland for 15 years against the storms and aggressive marine conditions it faces. Self-builder Phil Scott chose Cambrian Slate from BMI Redland, partly because of the recommendations from BMI’s Technical Department and partly because of his own knowledge – he’s experienced in construction as his family business includes caravan sites and pubs, for which he does his own building and maintenance.

“We’d done a similar job on a big pub further down the coast and used Cambrian on that and it had worked well. It didn’t clatter, it isn’t heavy, and the wind can’t rip it off. Plus, we get a 15-year guarantee if we install to BMI Redland’s recommendations.”

The ability to withstand the wind is crucial because of the house’s unusual design – Phil describes it as ‘four houses in one’ – as makes the most of the extensive views from its elevated coastal plot with the lounge, dining and kitchen areas all located at first-floor level.

An open roof aspect allows full-height glazing facing the sea, creating a feeling of space in the rooms. The extensive balcony for the lounge and dining areas has an over-sailing roof, supported on a steel frame, set at an angle that not only echoes the roofline of the property next door to the south, but also stops neighbours overlooking the property.

The net result of this is that there are effectively four roofs, all of them mono-pitched – which are notoriously susceptible to wind-damage – at only 17.5o to reflect neighbouring ridge heights. Architectural consultant Nigel Tottle wanted a natural grey/black finish that would complement the palette of colours being used for the soffits, guttering and fascias; while Phil wanted a low, preferably non-existent, programme of maintenance. The low pitch excluded natural slate while Cambrian Slate, the lightweight alternative with three points of fixing, was an obvious alternative.

“The roofs have nice sharp edges and a cleanness of line that adds to the visual appeal and plays a large role in creating the overall effect.”

Phil recruited a very skilled team for this project through his previous property work, including TD Roofing and Dean Leadwork from Taunton in Devon – a specialist in lead who normally works on church restorations. Dean’s expertise was crucial because the cuts to the slate edges made them too long for the cloak verges used on the other sections of roof, so Nigel and BMI’s Technical Department collaborated to produce the carefully detailed roof edge for the angled balcony roof.

As a result, the roof has a 15-year guarantee that covers weather tightness, durability and design liability – because the tiles are installed with recommended fixings under the BMI Redland SpecMaster service. This is a free-of-charge roof specification service that covers slates, tiles, fittings, accessories, fixings, ventilation, underlay and battens – all in an NBS-based format to integrate seamlessly into the building specification.

BMI Redland Cambrian Slate is designed with a unique three-point fixing, making them secure on even the most exposed sites. Manufactured to be lightweight with a thin leading edge and surface patterning taken from impressions of real natural slates, and proven on pitches as low as 15°, Cambrian Slates are suitable for a wide range of projects. Three colours are available: Heather, Langdale Green and Slate Grey – with Slate Grey also being available in a pre-weathered finish. 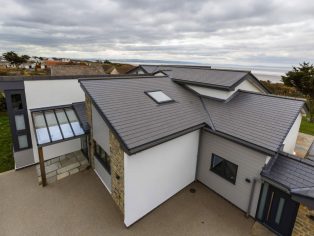