Beyond the Green Belt – a major exhibition at The Building Centre

A major exhibition that looks into the future of the Green Belt opened on 16 March 2016.

The exhibition, curated by The Built Environment Trust and the Landscape Institute, examines a topic at the centre of both conservation and housing crisis discussions, with a Government consultation on planning currently having Green Belt alterations as a key potential action area.

Beyond The Green Belt looks at the long genesis of the Green Belt and brings it up to date with an expression of the current conflict. A related talks programme will bring this debate into life. The exhibition concludes with projects and questions that look to constructively develop Green Belt thinking.

The curators aim to address, said Colin Tweedy, chief executive of The Building Centre, “whether Green Belt is British planning at its best or a grotesque imposition by the rich upon the poor, promoting controls that choke our cities and damages our countryside – or somewhere in-between. Such extreme contrast of viewpoints are represented in the range of voices covered in the exhibition. It’s an extraordinary volatile issue and highly political.”

“The Green Belt is often criticised for its poor environmental quality and for impeding house building, inflating land prices and frustrating transport infrastructure but it is also a vital bulwark against unfettered urban sprawl. Many organisations and policy makers have proposed vastly opposing approaches, from tightening rules over development to scrapping the planning designation altogether. This exhibition can help us come to our own views on the best way forward.”

The show sets out to explain the background to Green Belt and then explore the more innovative approaches to working with Green Belt environments, including learning from international approaches and current examples in the UK.  This exhibition also encourages the public to share their views on what should happen next with the Green Belt. A series of free public events during the exhibition’s run will delve further into the debate, bringing together expert speakers to explore the practicalities of current legislation, deliberate the polarised arguments and share ambitious ideas for the future.

“The public often think of the Green Belt as pristine countryside but in reality much of it is poor quality land with little biodiversity, disturbed by utilities and highways,” said Lewis Blackwell and Paul Lincoln, the curators. “The founders did not intend a girdle of intensive arable farming and golf courses. The Green Belt has served  its post-war purpose well of preventing urban sprawl but the time is now right to re-assess and engage the public in creating a transformative new approach that seeks greater emphasis on the public benefits. This exhibition will, we hope, lead to greater open debate about what we all want from the Green Belt.”

Beyond the Green Belt exhibition will be open to the public at The Building Centre, Store Street, London between 16 March and 27 April 2016.

The exhibition is supported by Pegasus Group and ACO Technologies. 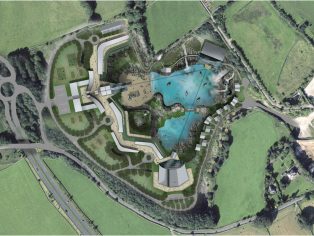