Phil Windus from ACO Technologies, delves deeper into drainage channel load classes, and explains why you need to know your A 15’s from your B 125’s

Given the country’s tendency to suffer from wet weather all year round, and the subsequent need to shift surface water in a variety of domestic applications – from roads and car parks to driveways and patios – drainage channels are an incredibly common building product. Often bought by the metre, and generally purchased or specified on price, drainage channels can easily slip into a ‘fit and forget’ category. However, by not taking the time to fully consider the final application, individuals can quickly find themselves confronted by disgruntled tenants demanding for the work to be re-done if a product with the wrong load class was installed.

Low down on load classes

In accordance with BS EN 1433:2002, all drainage channels are classified into load classes, which are effectively different categories detailing the load-bearing capacity of that product. Ranging from A 15 for pedestrian footpaths and patios, through to F 900 for airports and industrial yards, the system is a quick way of ensuring that, if you are fitting out a driveway or a patio, the right channel and grating – one that will stand up to the rigours of the application – is selected.  However, while the load class system itself is a fairly simple specification tool to follow, it’s one that surprisingly few people are fully up to speed with.

A case in point

Let’s put the issue into context. A 15 is the most commonly used drainage channel, and a staple commodity that is often bought again and again due to its familiarity, availability, and cost. If we take a typical scenario of a garden and driveway renovation, then A 15 drainage channels would be suitable for use on pathways and patios. However, where the issues begin to arise is when an A 15 channel is installed at the entrance or in the middle of a driveway. In short, A 15 should not be used in these scenarios as the product does not have the load-bearing capacity to withstand the pressure of a car turning on it (as is a common occurrence at the entrance for most driveways) or if a delivery van or bin lorry pulled up outside the house and parked on it. Here, the material would soon buckle under the pressure and start to break apart, both turning it into a potential hazard and generally losing its aesthetic feel. It’s worth remembering here that you can’t escape the fact that looks are a key factor when it comes to building work, and tenants will rightly be angry if their new property or driveway renovation is marred by broken drainage grates just a few months after being finished. In this instance, a B 125 channel would be best. It is the next load class up, has a higher load-bearing capacity and comes in at only a slightly higher price per metre than an A 15 channel. Importantly, it’s generally readily available in merchants alongside its A 15 counterpart. This is where having that extra in-depth product knowledge around drainage load classes can make a difference between the right or wrong product being installed first time around.

While A 15 and B 125 may be the most commonly bought drainage channels, the same principle applies to all load classes and applications. For instance, if a property developer was also responsible for building any flats as part of the development then B 125 would be sufficient for a small car park mainly used by domestic vehicles. However, if it were a large carpark open to the public, such as one supporting municipal facilities within a housing estate such as a row of shops or a library, where vans or commercial vehicles could feasibly park, then either a C 250 or D 400 solution is likely to be the best option.

In short, while drainage channels might seem like a commodity product, there’s much more to them than that. By cross-referencing the intended end-use with the load class and limitations of each product, installation of the right drainage solution for the application in question can be ensured. It might not seem like a big thing, but it will go a long way to keeping your buyers happy, and ensuring a job only ever needs to be done once.

Phil Windus is from ACO Technologies 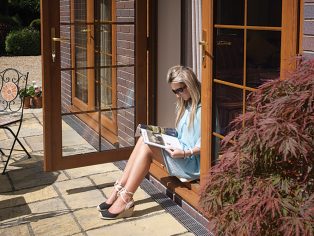 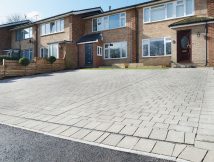