Berkeley Homes has been awarded the prestigious title of Most Considerate Site at the Scheme’s National Site Awards 2015, for its Roman House project, a luxury residential development in the Barbican area of the City of London.

The much-anticipated National Site Awards are one of the highlights of the construction industry calendar, recognising those sites which have registered with the Scheme and shown exceptional and ongoing commitment to considerate construction.

Projects registered with the Scheme must demonstrate an appreciation of the impact of their work on the community, the environment and their workforce, and this year was no exception with over 9,000 sites eligible to win a National Site Award.

During April and May 2015, the Scheme held 12 ceremonies across the UK and presented a total of 797 National Site Awards including 387 Bronze, 280 Silver and 98 Gold to an industry-wide audience of over 3,400 guests.

From the very highest performing Gold Award winners, a shortlist was produced, and this year Roman House by Berkeley Homes was deemed the overall winner for its refurbishment project to convert an existing office block into 90 high spec apartments.

31 other Gold Award winners shortlisted for this title were presented with Most Considerate Site Runners-up Awards.

According to the Monitor’s report, which is used to assess compliance against the Scheme’s Code of Considerate Practice, Roman House ‘gave an excellent image of the construction industry’. The report also noted that the site was ‘exceptional in all aspects of the Scheme and could be an example site for the industry’.

The site went over and above standard requirements to demonstrate best practice across all areas of the Scheme’s Code. In particular, the Scheme’s Monitor praised the visible information and graphics available to the public, the monthly email newsletter, constructive contact with neighbours, contributing to local initiatives, environmental awareness, and the numerous job opportunities for both apprentices and the unemployed.

A top score of 10 out of 10 was awarded for safety, with the Monitor highlighting the innovative use of hi visibility jackets for the workforce, which featured an in-built back support system and was highly praised by staff.

Other noteworthy safety measures adopted on site included the employment of a full-time Health and Safety Manager and external safety audits carried out every month.

Internally, there were ‘safe routes’ highlighted for the safety of staff, while an external banksman was deployed to protect the public when vehicles loaded or unloaded from the highway.

Rob Perrins, Managing Director of the Berkeley Group, praised the efforts of his team:

“The team at Roman House ran the site with exceptional cleanliness and presentation and showed real imagination in their approach. Site workers received visits from an occupational nurse every two months and they trialled hi-vis jackets with built-in back support. Over 20 tonnes of wood was donated to a community recycling project. They helped disadvantaged local teenagers learn about construction and worked in partnership with Shelter and Street Elite. This was a fantastic effort from everyone in Berkeley Homes (South East London).”

“It’s wonderful to see so many site award winners at this year’s 12 ceremonies. I’m delighted that the UK’s sites continue to strive for improving standards and would like to thank them for their continued support of the Scheme.

“Berkeley Homes has demonstrated exceptional best practice and is an extremely worthy winner of this year’s Most Considerate Site. With exceptional site scores and a glowing report, they have displayed extraordinary commitment to the Scheme’s Code of Considerate Practice.

“The work at Roman House is a fantastic example to the industry and truly deserves this highest award. Berkeley has been a long-standing supporter of the Scheme and winning 36 awards in total this year proves their commitment to considerate construction. Many congratulations to everyone involved with the site.” 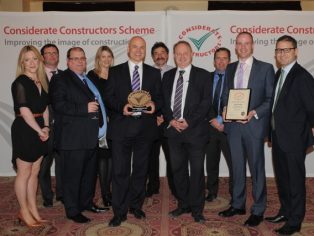