The future looks bright for Leeds Badminton Centre after Barclay LED Solutions completed the installation of an innovative new lighting system, which will reduce carbon emissions by almost 6,500 tonnes a year.

Fifty, 130w high-powered, LED fittings were installed over five working days reaching 600 LUX, replacing the existing 400W sodium fittings – which only reached a maximum of 200 LUX. This will reduce the centre’s energy output by over 12,000 kwh a year and also meet the standard for its ongoing environmental strategy.

The aim of the centre, which is in Garforth, Leeds, is to provide opportunities for players of all ages and abilities. It was officially opened by Jenny Wallwork, Commonwealth Silver medallist and badminton coaches Harry and Barbara Jarvis, along with representatives from BADMINTON England, the Leeds Badminton Network, Leeds City Council, Sport England and West Yorkshire Sport.

Commenting on the new facilities, he said:

“Barclay LED Solutions have recently completed LED lighting installs for two capital projects on behalf of BADMINTON England in Yorkshire, which included the new Leeds Badminton Centre. The company was able to demonstrate how LED lighting would meet BADMINTON England and Sport England design guidance in both a four and five badminton court sports hall.

“Barclay LED Solutions were extremely informative and co-operative throughout both projects and they were able to address the technical issues and critical factors in order to provide the best possible playing conditions for badminton in both a multi-use and dedicated badminton facility. Both casual and performance badminton players and other indoor sports users at each facility have reported extremely positively on the new lighting.”

“We worked very closely with BADMINTON England to manufacture a fitting that produced the right colour and durability for the sport.

“Our lighting system was designed and installed to meet their specific club class requirements and with the co-operation of both BADMINTON England and Leeds City Council, we were able to re-fit the sports centre in time for players to put the courts to use straightaway.

“The badminton courts are much brighter as a result of the refurbishment, proving that LEDs are not only effective for lowering energy consumption and reducing overheads, but they produce a much cleaner light, which is better for the players.” 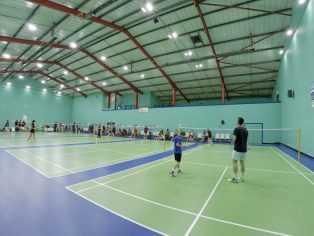