Dexter Moren Associates (DMA) has hit the back of the net with consent for 18 additional rooms at the popular Best Western Plus Hotel, close by the landmark Wembley Stadium. In two successful simultaneous planning applications, DMA has redesigned the sub-basement car parking and added extensions to the rear of the existing hotel to increase the number of lettable rooms to 210.

Building on the success of their original design for client London Hotel Group (LHG), DMA has sensitively designed the additional volumes to avoid overpowering the hotel’s neighbours, allowing the extremely busy hotel to cater for more guests.

Explains Herbert Lui, Partner at DMA: “In the light of consistently high occupancy levels since its opening, our client has been keen to explore extension opportunities at the hotel. The two recent designs, which add 18 new guest rooms, have been well received, sympathetically increasing the massing and density of the hotel whilst retaining the design intent of our concept.”

In addition to the original design, DMA has been responsible for several successful extensions to the busy hotel, the last in late 2017, adding seven guestrooms, four of which have already been built. In their latest design, DMA has reconfigured the sub-basement car parking to add seven rooms and the application for extensions on the first, second and fifth floors creates eleven additional rooms.

Sited on the High Road (A404) in Wembley Town Centre, the Best Western Plus is within walking distance of Wembley Central and Wembley Stadium Stations.

DMA is to carry out Design and Technical Development (RIBA stages 03 & 04) and Construction phase to completion (RIBA stages 05 & 06), with an expected start on site in Quarter 3 of this year.

Image – ‘Shows only one application’ 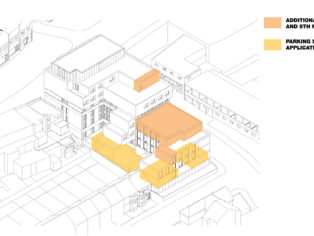